eskimo wrote: ↑Played a little, tis rather good so far. Though i must admit i've been dicking about somewhat on ra recently :p

Haha I can relate to that :p


eskimo wrote: ↑Though it does feel like it could be played seriously and be good. Will provide some feedback when i can.

Btw, I think this is close to be the official version, so final remarks are welcome ^^
My (dormant) YouTube channel : FRenzy OpenRA
Join the map-making train here
Top

Lol, very in depth explainations!
I like playing on doublestep, it really shows the effort made :)
Check out Dune2k-Advanced on my moddb page!
Top

Thanks man ! Glad that you appreciate it

Yeah I like to give the thought process, I hope it can inspire pepole to make better maps than mine

top spawns are forced into a mini 1v1, a little on the chokey side. Bottom 4 are in a much more open area.
Top

Also, are you still working on this ? http://www.sleipnirstuff.com/forum/view ... 157#303157 If yes, do you have a link? If not, should I label it as abandoned ?
My (dormant) YouTube channel : FRenzy OpenRA
Join the map-making train here
Top

The maps are intended to be sister maps.

Aurora has an ore total of $239300. Top spawns are split from the bottom 4 to form a mini 1v1. The top has a huge ore field in the center to fight over which will be hard to control without help from team mates. Even with help the odds are that area will be hotly contested. Each spawn has 1 safe oil and 2 to fight over.

The bottom instead starts with a huge shared ore field with 5 mines ($34350). Each side has 1 safe oil and 2 to fight over initially, if someone chose to, they could capture 4 water locked oils derricks.

Borealis Shares similar qualities to Aurora. Although it has less ore at $219800. Top spawns are again split off from the rest. All three oil derricks are contestable. The top spawns each have access to a gem mine embedded deep within an ore field.

The bottom spawns have 1 safe oil derrick each, 2 that are semi-contestable, and 3 that are highly contestable with the bonus of a hospital. The river puts pressure on 8 ore field from destroyers. t3 could potentially be a huge problem for the top spawns if the bottom doesn't support.
Top

you can list scientifically mad as abandoned for now. If someone else wants to take it up let me know I can send the mapfile!
Top

River Borealis is fun to play and has a lot of sucess with players looking for good teamgame. I had some entertaining game on it.

River aurora feels to linear on a general opinion of the players.

My first go at a 2v2 map when the latest became available, called Burning Plain: 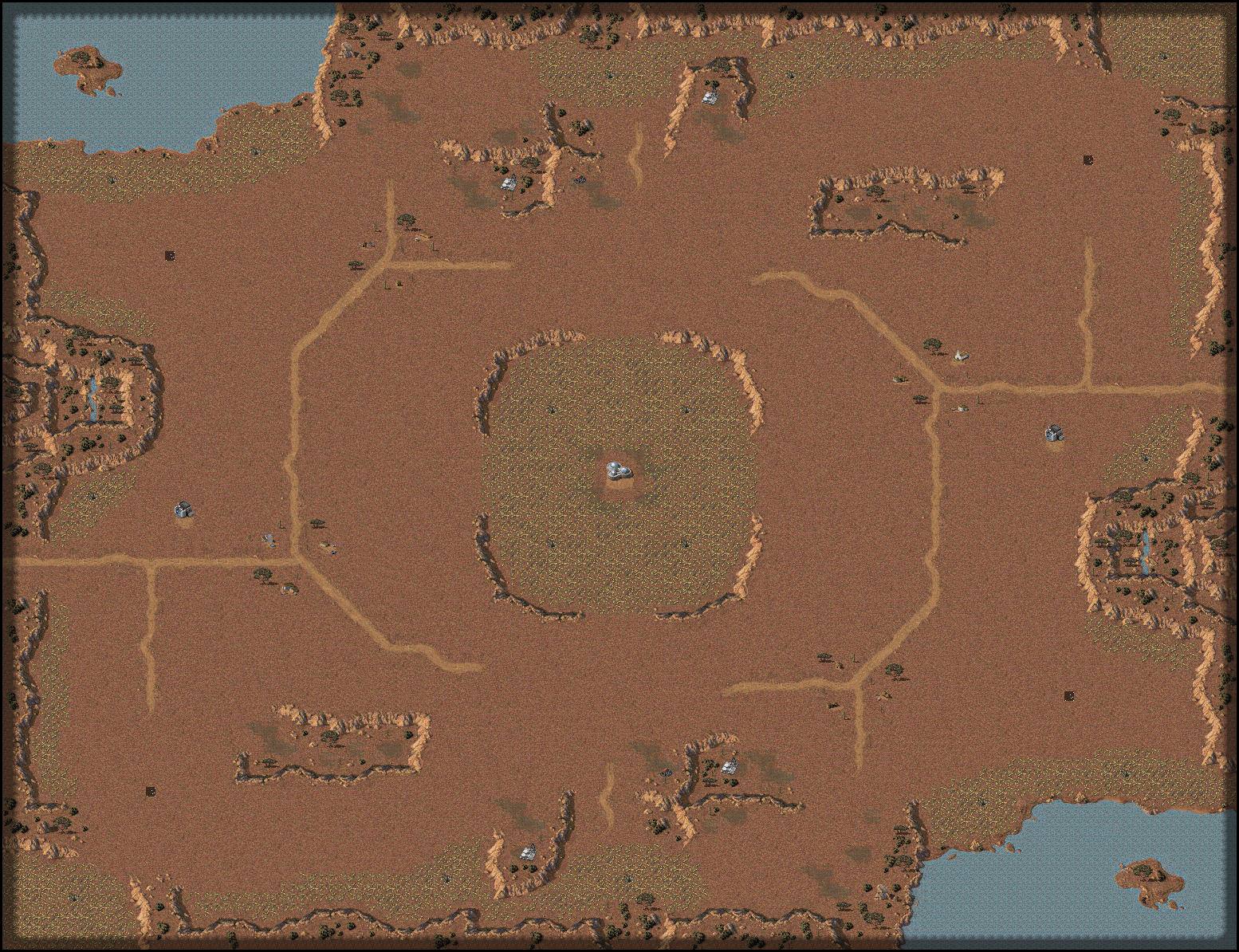 I want to first say I love the general look of all your maps I've seen so far. However the ore amounts on them are insanely high.

~540k for burning fields as a 2v2. That's a little of 100k per player. With the huge ore field in the center removed there is still about 300k on the map.

tyrants and climax have 140k total ore, which is on the lower side, Operation goldmine has 170 and always produced fun games when SoS would stream it, or doublestep which has 200k. Tandem, Vihaan lunta, and x-lake all have more than 200k
and still make great games. The 2v2 map with the highest ore total that I would still consider to be competitive is minor pressure at 340k and I don't think I've seen that map go more than 15 minutes. So my point is I think big eco maps can work but you're even bigger than big eco maps

Slight aside from the topic at hand but same thing applies to 1v1. Right now in RAGL Ysmir and Dual Cold Front are probably the biggest eco maps at around 100k. Another Tomorrow has 1.5 times that at 250k but again I love the way Another Tomorrow looks!

I'd like to see you make a map with a bit less ore and see how it turns out.
Top

Cheers for the feedback!

I think a round of revisions is on the cards then to reduce eco to something a little more sensible.
Top

184K starting ore (23K at the spawn per player) and 5+1 mines per player seemed enough in 1 FFA I managed so far.
Top

Revision 2 of Burning Plain - reduced the amount of ore: 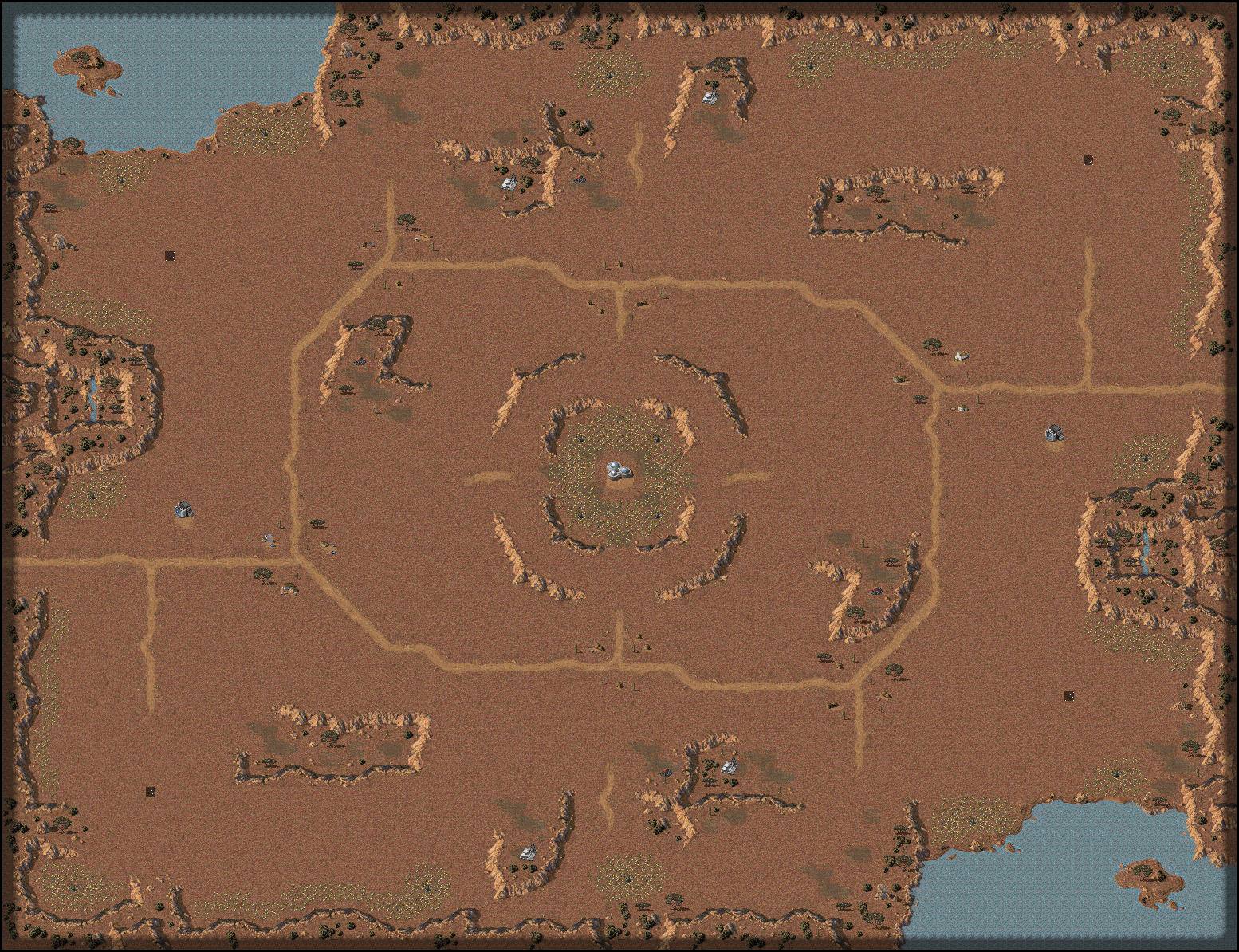 Hello there!
I've thought about refreshing the official map pool a bit, but my lack of teamgames playcount prevents me from objectively select good team maps.

This thread has gathered a lot of nice maps around, so I'd welcome any suggestions for good maps to be included.
Top
Post Reply
140 posts