Updated as of March WOOO!

Alright so its finally complete (for now anyway) i have now successfully ported C&C Meets Star Wars to OpenRA.

All i have done is ported the C&C Meets Star Wars mod by Nyerguds to the OpenRA engine, basically as a small proof of concept for myself. But i thought id post the mod files here and see what people think

KNOWN ISSUES:
None at this time 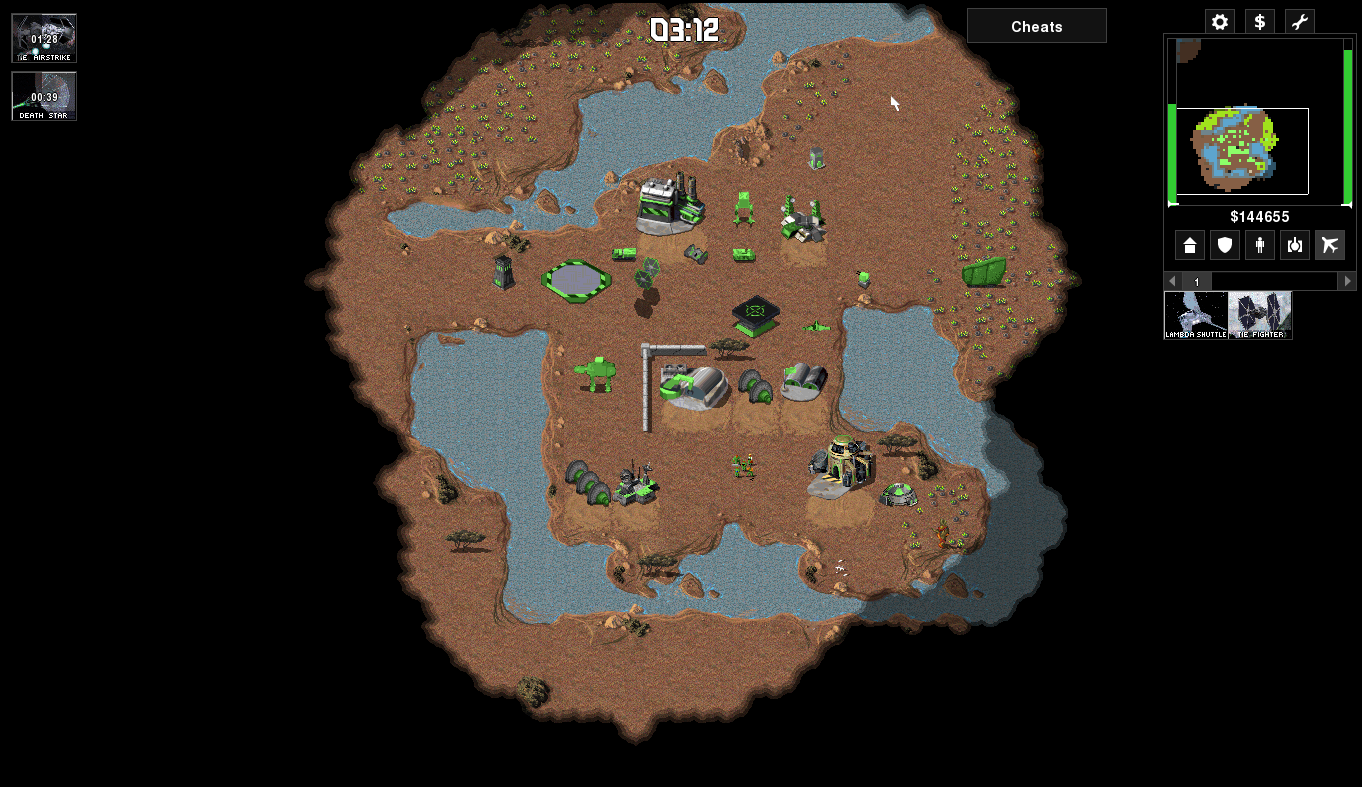 Not getting it to work.

After I installed freec&c, then I got to install the star wars mod, but the staricon.mix is not there, so the mod will not start.

Just spent a few hours trying to beat AI on the freecnc star wars mod. The music and the units, its fun... a whole new game.... But damn its hard to play the missions...
Top

Nice idea. As I recently added the CnC snow terrain from Nyerguds patch you can also make a Hoth map

I repackaged this to be compatible with the latest CnC Starwars version complete with the .mix files because it is annoying to search for them and I had to use Wine to install C&C95 1.06c and CnC Meets Star Wars. I only made a few changes to the mods.yaml because Nyerguds replaced staricon.mix with terrain specific icons (this is not required for OpenRA). PS: I forgot to add snowstar.mix

Some sound files are a little noisy and the A-Wing was still the apache, the millenium falcon still the hand of nod. The rest worked out well. Quality of the replacement graphics is really intermingled. As this is the only total conversion for cnc, it is truely something special.

Maybe chrisf will hand over some higher quality SHPs to you http://www.sleipnirstuff.com/forum/view ... hp?t=14963

If you want maps you can try to extract the .mix files with http://xhp.xwis.net/utilities/XCC_Mixer.html and import the legacy maps into OpenRA.Editor.exe As this is a total conversion which just replaces graphics, sounds and videos, it might work without touching any source code.
Top

Yeah thanks for the input, i was a little wary about including the MIX files since it technically isn't my mod.

I'll look into adding the maps, and tweaking some more things if necessary when i have time later this week.
Top

Works great, and since many OpenRA players do not know c&c well, and are not used to music, this really is something new and amazing.

I just hope you get some help from Valkyrie (For AI), since it would be cool to have the speeder bikes ride two and two around the map...

And I also hope you can change to single production cheme, since it is the main stopper for many OpenRA players playing c&c multiplayer (crazy build walk)

The music is awesome!!!
Top

Anyone out there good with SHPs? i tried to fix the harvester docking bug and ended up wasting an hour and had nothing but a broken SHP.
Top

Dan9550 wrote: ↑Anyone out there good with SHPs? i tried to fix the harvester docking bug and ended up wasting an hour and had nothing but a broken SHP.

Yeah, I'm pretty good with SHPs. I made the SW mod, after all.

What exactly needs fixing? It should work exactly like the C&C one...

On a related note, not sure which version of the mod you use (haven't checked out the pack), but the site and mod are still online at http://cnc2sw.ppmsite.com/
Top

I guess then OpenRA changed the original harvester dump animation in mods/cnc/sequences/vehicles.yaml

There is a custom harvdump.shp in mods/cnc/bits which might not be the original. First of all delete that one in mods/cnc_starwars/bits and you might have to find out the original sequence for the harvester by looking at the SHP frames.

PS: Seems that the original cnc had the harvester unload in the proc.shp https://github.com/OpenRA/OpenRA/commit ... 82a563767f

Harvester docking in general is tricky. It took me quite a while plus some code changes to get it done for d2k.
Top

Well, yeah, the harvester docking is part of the refinery building in C&C. I expected the C&C mod to already have that implemented, tbh... it's quite silly to go making extra SHPs for something that should just be a straightforward second implementation in OpenRA.

The C&C refinery animation is this:
(straight from the exe, converted to ini here; in stranims.ini)
(Note that I'm not 100% sure about the meaning of the "delay" thing, or if it's even really a delay.)

I changed the order of the sections above to correspond to the actual order of the animations in the SHP file. The full SHP is of course this whole sequence, then repeated for damaged frames, and then the added collapse frame at the end.
Last edited by Nyerguds on Mon Jan 07, 2013 10:00 am, edited 2 times in total.
Top

We split the dumping out from proc.shp so that we can have allies dump at each other's refineries with correct colors, and avoid having to have an invisible harvester for part of the sequence.
Top

Well, guess someone will need to remake the unload stuff for the RA2SW mod then... can't be too hard, the unload anim is really simple. Just harvester pasted on refinery, a tube docking on, and pixel-semitransparent clouds coming from the chimney thing :p

Might do it on the train to work if I got some time, though I don't have OpenRA installed I think, and got no idea where to find said that custom unload SHP.

chrisf: is the original refinery unload SHP still under that, or is that shp edited too?
Top

Yeah i started working on it, i managed to get part of the animation working not the whole animation though since its different and all.
Top

The harvester plays its harvdump sequence when unloading, which is drawn on top of the unmodified idle frame for the refinery. The harvester is shifted by the docking activity into the correct place for the overlap to appear seamless. The original purpose of this was to prevent people from seeing other players' harvesters pop out of nowhere when unloading under the fog and to allow the docking code to be shared with the ra mod. Allowing docking with other refineries was a nice side effect.

proctwr.shp is an overlay, again drawn on top of the idle sequence, which indicates the fullness of the refinery - a nice polish improvement over the original game, but unrelated to docking.
Top

Sleipnir wrote: ↑proctwr.shp is an overlay, again drawn on top of the idle sequence, which indicates the fullness of the refinery - a nice polish improvement over the original game, but unrelated to docking.

So wait, it abuses the filling tower animation as silo status? That kinda doesn't work for the C&C2SW graphics. The unload animation is a cloud of steam escaping a chimney.

These weird liberties taken on, well, everything, are pretty much the reason I can't get myself interested in OpenRA -_-
Top
Post Reply
46 posts