TLDR: I want to change the division assignment slightly for RAGL S13. There's an example at the bottom of what this would have looked like in S12.

TLDR: I want to change the division assignment slightly for RAGL S13. There's an example at the bottom of what this would have looked like in S12.

As previously mentioned I want to update the division assignment rules for RAGL S13. The rules we have been using have proved to be fairly good at seeding players into the appropriate divisions so I intend to preserve the spirit of it. There are predominantly two views on what the system should achieve. Firstly the traditional aim is to move roughly 30% of players across each division boundary each season. The issue with this is that good players who have either skipped a season (e.g. Blackened in S11), or are completely new to RAGL (e.g. despro in S12), would have to start from the bottom division and this can lead to more one-sided games.

To avoid this issue we currently use the RAGL ladder ratings as a way to seed new players into divisions. There are a couple of potential issues with this though. Firstly we may have a large number of "new" good players in a season. The top twelve players from the ladder were not part of S12 and if they all signed up next season (very unlikely) then we'd potentially have no continuity in Masters at all. The second issue is that the top player from Minions may not end up in Masters. It turns out that this has been a possibility since at least S07 when most of the current rulebook was created. If the Masters division shrinks between seasons then the promoted players may fall outside the bottom of the division (or alternatively the promotion can be honoured, but it has a knock-on effect on the viability of the other divisions). This situation is exacerbated by allowing new players to jump straight to Masters. In short we should have a cap on how many new players can end up in Masters.

To achieve the sense of promotion and relegation (and importantly continuity for those players who wish to continue) then I've come up with the following algorithm.

There are some edge cases around this, and the behaviour in these situations is documented by the script I've written to handle them.

It's important to be able to completely order all players so there needs to be a comprehensive tiebreaker: The first five of these are used during the season to determine positions in the league. I'm not proposing to change this, but when players are completely tied during a season then the other three points may determine who will be in which division. There has been an assumption in the past that tiebreakers will decide this, but it's impractical because we don't know whether the tiebreaker will be needed until a couple of days before the start of the season (and organising a match in RAGL typically takes a lot longer than this).

This is already in use, but the significant change is to include returning players in this list too (so they appear in both lists). Anyone without a ladder rating will be placed at the end and sorted by their forum id (lower is better).

Starting with the Continuity Ordering then players are taken alternatively from the two lists. Once the lists are completely combined then the duplicate entries are removed (whichever is lower for each player). This effectively means that a returning player could escape relegation if they have an outstanding ladder rating (i.e. they are treated fairly when compared with a new player).

From various iterations of RAGL then I've found that 12 is a pretty ideal division size. It is also the original division size used in Seasons 1-6. Consequently the script aims to divide the participants into divisions of as close to 12 players as possible.

If we had used this algorithm to draw up divisions for Season 12 (assuming the players who initially registered - i.e. Kaution and not Tailix) then we would have seen the following. 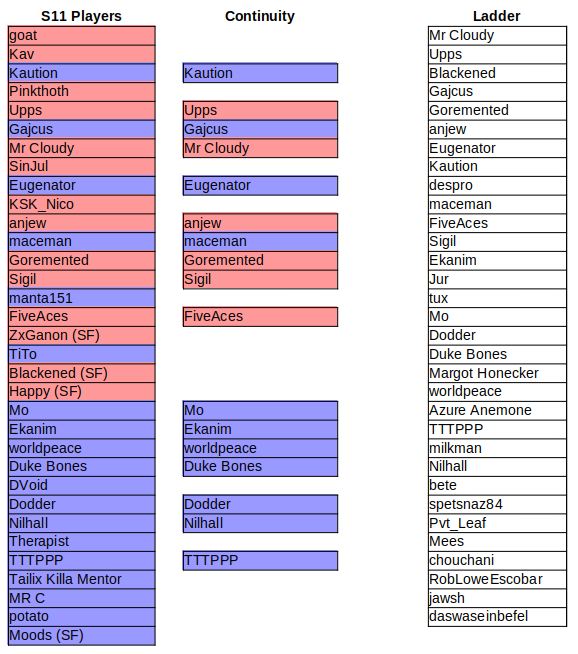 Combining the two lists together we would have got divisions looking very similar to what actually happened (the only difference is that TTTPPP and Azure are swapped).

Although despro was placed in Masters by the algorithm then it was quite close, but this was due to having a relatively low ladder rating. One simple way to fix this would be to include results from other 1v1 competitions in the RAGL ladder - for example the Kautious Kup was played with competitive settings and the results would have pushed despro's rating up quite a lot.

I'm currently working on evaluating the older seasons to see that it draws up reasonable divsions, and assuming everything looks good then it should be in use for Season 13.
Last edited by TTTPPP on Thu Jun 02, 2022 6:53 am, edited 3 times in total.
Top

Repeating the same process for signups for Season 11 we get the following. 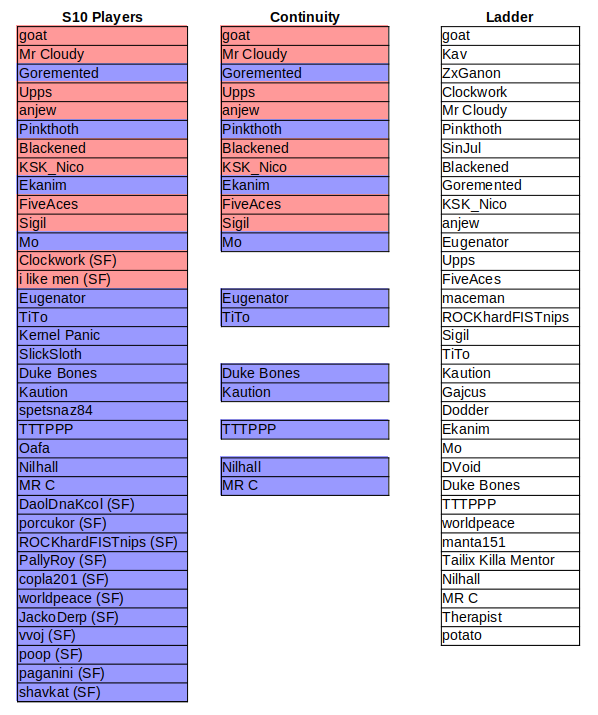 For three divisions with 11 players in each then this looks fairly reasonable. Gajcus would have almost certainly dominated Recruits, but there was no way to know that at the time since he'd only played a handful of games on the ladder when the divisions were drawn up.

In reality for Season 11 we decided to have a larger Masters division and two parallel Minions divisions, so this looks a fair amount different than what happened. However using this ordering of players and putting the top 14 into Masters (which is what happened) then the only players who would have been swapped are Ekanim and Sigil.
Top

For Season 10 then this is what it would have looked like: 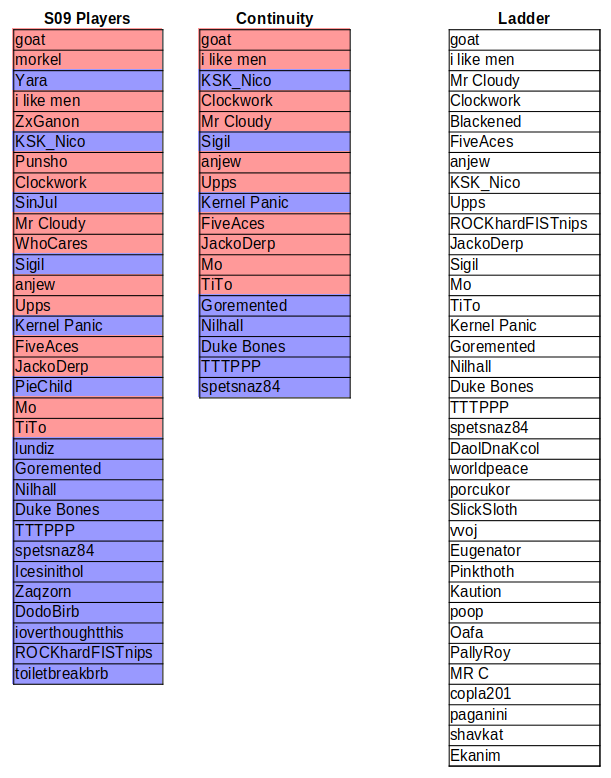 Several top players from Season 9 didn't return along with quite a number of Minions. Using the algorithm to split these into divisions we get:

Similar to Season 11 then it's a little hard to compare this with the real Season 10 due to the parallel Minion divisions that were used. The top ten players assigned to Masters by the new algorithm exactly match the actual players who were put into Masters. Looking at the Minions/Recruits split then I was surprised to see players like Pinkthoth put into Recruits, but this was because there was no ladder back then. It wasn't possible for a 'new' player to prove themselves except in competitions. Hopefully new players would now have the opportunity to be seeded more appropriately with the ladder and any other competitions (e.g. Kautious Kups) and this wouldn't be a problem.
Top

Now that Season 12 has finished then we have the first part of the division assignment for Season 13. The following image shows the continuity positions that players from Season 12 have achieved provided that they sign up for Season 13.

Players who were season forfeit and any players who don't register will be removed from this list to make the Continuity ranking list. Everyone (including new players) will also be rated separately using the RAGL Ladder ratings. Finally we will combine these two lists and draw up the divisions to try to be as close to twelve players as possible.
Top
Post Reply
4 posts • Page 1 of 1