yellow (theRaffy) wrote: ↑
@Wippie
heroes is also a nice map, very interesting, I had doubts about too much wood but, it's good playable and the expansions create good tension.

Thanks for the feedback. If anyone wants to, they are more then welcome to post feedback and or modify the map.

I had some concerns about :
- balance
- pathfinding
- eco

I tried making a map where going for early tech is viable and big blobs can not move around easily. I noticed in medium blobs you really need to babysit your units moving through the forest.

If you want to, i would love to see some specific feedback on the above
Top

I find this quite funny to be honest.

Having multiple armies requires more micro to arrange your composition for example getting your tanks in front then rifles and rockets to optimise your army survivability and damage. Many a time i have seen good solid "macro" players as you call them lose engagements because they cannot micro Thier army into formation and get shredded. Also whilst in an engagement microing your units to be shooting optimal targets is no easy feat. Example. Tanks on tanks or defences whilst crushing infantry. Rockets hitting tanks and Def's while getting your rifles not wasting shots on tanks and defs. This is micro at its most difficult. So this leads me to my next point.

I think you are confusing micro with play style. Just Because your play style is is flamer dropping x3 and piss farting about with super early v2s doesn't make you a "micro" player. It makes you a shenanigansâ€‹ player and these so called 'micro' maps are just less punishing on failed shenanigans and goofy builds. If you have solid micro then you should be good on any map not just small maps. Micro is much more than just hit and running a v2 and playing with MIGs. So if this is more about tech not being viable then that's untrue plenty of good players tech they just do it properly.

Only being able to play on kindergarten maps that requires minimal attention is no-ones problem but your own. If you haven't got the Jacobs crackers to play with the big boys then don't. No-one is forcing you to. If your sat in a lobby on a map no-one wants to play then that's tough.

You remind me of this kid in school that complained because everyone at playtime was playing football and he didn't like it because he sucked.. I still remember him crying because the dinner lady said "if no-one wants to play tennis with you then it's tough, play football with your mates and stop crying about it. Long story short his mum came in and got football banned because it didn't include everyone. Well instead of playing tennis like he hoped we played tag instead ... And he was shit at that too. Moral of the story if people want to play tennis then they will.

I clucking hate the map pool for global league it's utter poo but I wanna play global league so I sucked it up and just got on with it . Reading through this it sounds like next season's map pools going to be worse so it's up to me to either get on with it or find something else to do.thats what adults do.
"I love the smell of JuiceBoxes in the morning"
LT. COL. Bill Kilgore
Apocalypse Now
Top

Your message is quite offensive tbh.

The map pool is critisized a lot, from different angles and this was calculated in by the organisation.

some people in this thread are identifying needs from the player community, trying to build maps eventually trying to make RAGL even better. I would love to see you do the same
Top

Time to bring back Forest Path to the RAGL map pool. The triggering makes it all worth it.
Top

@ Juicebox
A bit harsh, from you. Methinks thou dost protest too much.
Criticism should be allowed. So, it would be nice, if you can explain your utter poo theory? Sure, there's a clash of interests, but I argued with reasons, so should you.

And yes, you are correct, as bigger the blobs and the maps, as more micro you need to win -> the less clicks on shenanigans will make any difference.
Spending time on unit preservation is a waist, compared to ordering/rebuilding five units within the same time, considering the high income with conyard mass on RAGL maps.
That's why the new game-style is more efficient than the old and btw. I never denied that micro clicks are helping to decide engagements, but they aren't that easy to pull them off in great scale. I'm afraid micro:macro doesn't scale up in the same ratio. There's no mass micro A-Move for example.

I perceive focus on unit preservation and shenanigans as more micro intense play style, than brood forcing macro play.
That's why I call for more micro play style friendly maps, that's what I meant. Thanks for figuring that out,.. dickhead
Top

Well, Wippie
the map needs some serious refurbishing.
Here some points that should be improved:
Top

No problems yellow I aim to please.
"I love the smell of JuiceBoxes in the morning"
LT. COL. Bill Kilgore
Apocalypse Now
Top

yellow (theRaffy) wrote: ↑ I perceive focus on unit preservation and shenanigans as more micro intense play style, than brood forcing macro play.
That's why I call for more micro play style friendly maps, that's what I meant. Thanks for figuring that out,.. dickhead

Unit preservation is important regardless of the scale. Just because you can pump out troops faster doesn't mean you can afford to throw them away. going into your next battle 130% vrs 100% is always going to be an important factor.

So a "micro" friendly map is small and low eco. Small so that you don't have to split your attention on multiple focus points. Low eco so that while your playing with your V2's and aeroplanes you are not falling behind on scale...... (I dunno how to type the rest without being mega insulting but I'll give it ago) sounds noob friendly hence why I called it a kindergarten map. Once u built your ref on your little ore patch you don't have to think about anything else but your units. You say shenanigans are less effective on big maps. This is only true if you have halted your entire game to pull it off. You have to carry on scaling and switch focus rapidly between the two. I don't think big maps make "micro play" less effective I think that the difficulty of switching between the two is the problem and this all boils down to skill.

You say a more intense game. Knowing exactly what your opponent is going to do on a small map is not intense. you are limited to options due to the lack of room. So small maps tend to end up divided heavily AA'd and arty shells flying everywhere. Yawnn. Bigger maps have multiple possibilities multiple focus and Multiple attack vectors. Do I build up my army here? Wer is he building his army? If I attack here am I vunerable here? . So I'd say having to worry about what my opponent is doing and thinking is more intense on a big map than a small map.
"I love the smell of JuiceBoxes in the morning"
LT. COL. Bill Kilgore
Apocalypse Now
Top

I think large maps actually have more potential for shenanigans. Enemy is easier to bait into not noticing your tricks and there are more sneaky ways around the map. I have lost to WhoCares on agenda in a situation where I was heavily ahead. He dropped 15 flamers in my main base and my main army was terribly out of position. I would say maps such as agenda are hard to play for all playstyles.
The supreme art of war is to subdue the enemy without fighting.
-Sun Tzu
Top

I don't think smaller maps and artillery make for boring games. Firstly non-stop shelling makes for non-stop engagement and action when you get into the game. And of course, it's not just artillery: it's naval, it's nukes and Chrono and IC, it's air attacks, it's trying to carry out sneak attacks or take out the enemy nuke.

Yeah you can argue that there are certain advantages to larger more open maps where mobile armies win games. That and base expansion. But you can just as easily complain that this results in a boring style of game as you can moan about artillery.
Top

My criticism of chokey maps is that they naturally take out one of the three elements. Chokey maps reduce the possibility of flanking artillery, removing mobility as a counter. This forces the player to respond to artillery with artillery.

Open low eco maps arenâ€™t as bad, but they still force a player to secure as many ore patches as they can before teching. Tech is already hard enough to do on other maps, but low-eco exacerbates the reliance on low tech units and structures.

Only a relatively open map that allows at least basic flanking movements will allow all elements of the game to come into play.

Regardless, all Iâ€™ve said and anything anyone else has said above becomes moot if auto-targeting buildings is taken out. If you think the macro blob-style is bad now, just wait until a blob can a-move through a base eliminating all opposition with the only thing able to stop it being another blob.
"Do not trust the balance tzars (Smitty, Orb). They are making the changes either for the wrong reasons, for no reason at all, or just because they can and it makes them feel good." - Alex Jones
Top

Not to toot my own horn but wasn't my map, Snow Off, just added to the game map pool as a replacement for Forest Path? Would love to see it in RAGL. 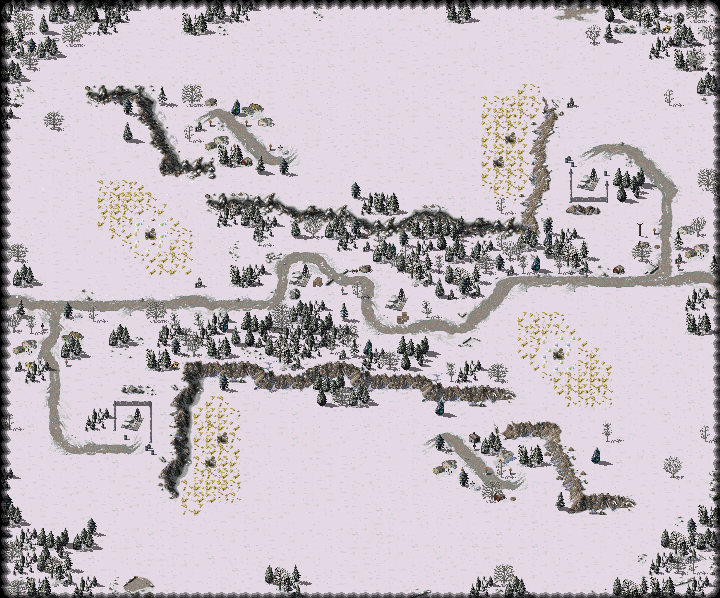 SirCake wrote: ↑Well, Wippie
the map needs some serious refurbishing.
Here some points that should be improved:

I took your advise, as well as some adjustments coming from ingame testing, and used this to revise the map.

As always, all feedback is welcome.

PS Yellow. Is this the route you're looking for? Are we on track? 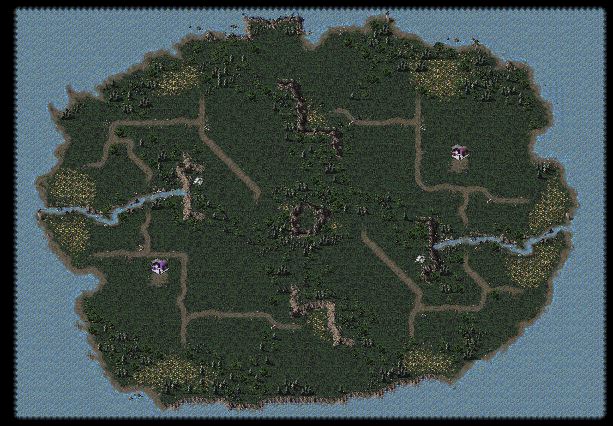 Aaron_Lloyd wrote: ↑Not to toot my own horn but wasn't my map, Snow Off, just added to the game map pool as a replacement for Forest Path? Would love to see it in RAGL.

I played this map a couple of times and in my opinion it playes pretty straight forward each time. The eco is very low and there is one natural expansion for each player.

But, I like the lay-ouy of the map. I don't think much work is needed to make it a good map.
Top

@Wippie, I played Heroes and I must admit, it's a pretty fun map. What I liked is how hard to base-push on it because of the careful placement of trees. It's small, but not very choky. It has enough ore for different strategies, and makes it possible to build ships.

There's some difference between spawn locations (top spawn is closer to the ore), which can be fixed.
Last edited by kyrylo on Sat May 20, 2017 12:10 pm, edited 2 times in total.
Top
Post Reply
32 posts