Hellow ÑƒÑ”â„“â„“ÏƒÏ‰ here,
You might know there's that big popular thing called "RED ALERT GLOBAL LEAGUE", for all the players who love to master the arts of macro management.
The RAGL map pool is containing optical pleasing, good balanced and standardized maps, optimized for entertaining competitive matches.
Considering that these kind of maps are slowly dominating and replacing all the other competitive maps, this confirms that they are a good step forward.
As you understand now, the RAGL is impacting all of us. Even the players that don't participate in the RAGL, like me.
That means it's concerning all of us.

With the rise of the RAGL and their maps also emerged a new play style, witch is heavily relying on these kind of standardized maps.
This play style has become the dominant style and has been quoted as ~"stupid and boring but working".
People starting to seeing it as broken and are desperately trying to fix it with balance changes.

I'm afraid a balance change can't fix the root of this problem. In the name of all the non RAGL players, the RAGL map pool has to change. It's time for the next step.
I suggest an equal amount of balanced micro maps to avoid the macro play style world dominance.
Please take this call serious and help to create some equal space for the micro skilled players, they deserved it!
You know, the cheese lords, who care about units preservation the most.
Plz, feature some low ore, water and/or closed (choky) maps in the next RAGL Session.

It would be awesome to see some supportive micro map suggestions, or even another contest.

Thanks for being awesome!
ÑƒÑ”â„“â„“ÏƒÏ‰
Top

for example this map has great potential:

Can you give some examples of the type of maps you want to see?

I made this small "low eco map" awhile ago and updated it two days ago. I find it quite hard to make decent small maps. Small low eco maps can snowball quite hard. 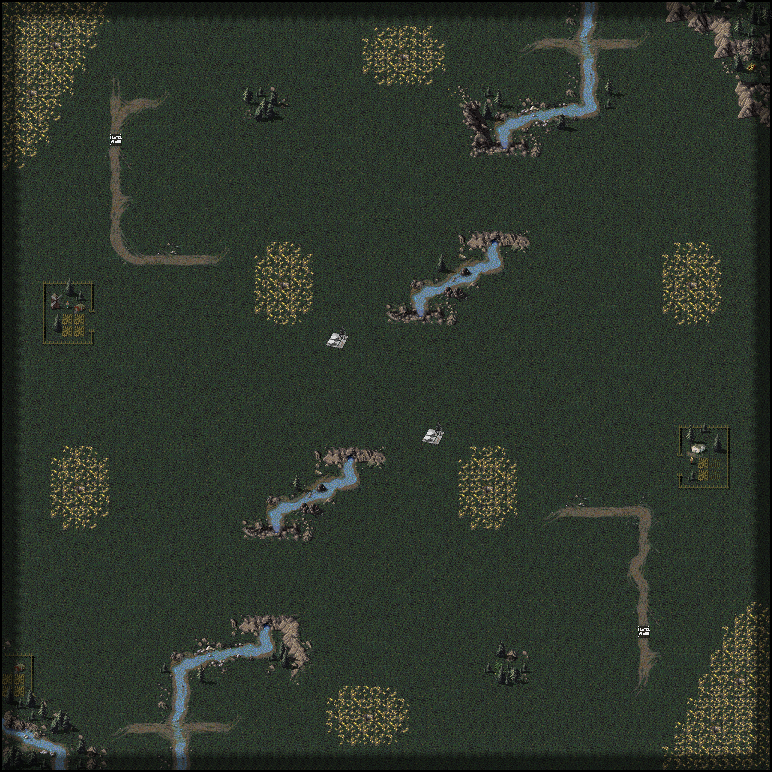 For the time being, naval maps are out of the question for the league (excluding some of the hybrid maps). As for the next RAGL map pools you can expect more variance (low eco, small size). To a cetain extent the season 3 map pool is in place to deliberately expose the most blatant exploits that stems from big-macro and base crawling. A growing number of expert players continuosly expose weaknesses of the mig macro games. Balance changes can adress some of these issues, allowing map makers a bit more wiggle room when it comes to competetive map design (decent macro maps are hard to do) and overall make macro games play decent in comparison to the skirmish/micro games that admittedly are more fun to watch and play.

In short, RAGL will make a turn towards more micro/low-eco maps next season.

For some loose defenitions I'd consider Mountain Pass to be a large map, low-eco and Keep off The Grass 2 small-medium map, medium eco.
Top

Desert Rats, Keep off the Grass 2, Patches, Winter Storm 2, Northwest Passage.... I thought this season's map pool was already unfriendly towards standard players.
"Do not trust the balance tzars (Smitty, Orb). They are making the changes either for the wrong reasons, for no reason at all, or just because they can and it makes them feel good." - Alex Jones
Top

As intended but that list don't include maps such as Forest Path and Singles (Season 1), "fringe" maps that was never replaced with any other outside-the-box map types. Unfortunately maps such as these being playable seem to be a bit too few and far between.
Top

In the old days you really had trouble at basebuilding (no space), expanding (no space!), unit spam (no resources) and were often forced to place refineries in waaay anwkward locations.
Resouces loosely spread around an area with no ore mine there is also a good way to make a map more westwoody.
All this lead to small groups of units focused on unit preservation, slower development and more time for shenanigans. Simply make it HARD for the payler to properly play YOUR map ;D
"First Come, First Served" is an excellent example on this
Top

The real question is, "Is there room for micro to coexist with macro in the current map pool?" The answer to this question is "most likely no", because as long as you have good macro, you will win 90% of your games against players with lesser macro. Sure, you can sidestep around this by forcing players to play on maps with no regenerating money and a limited amount of assets, but then you're just reversing the skew. The maps you're suggesting would be 90% micro/10% macro rather than 90% macro/10%.

I wholeheartedly disagree with this method of balancing, with my reason being that forcing people to play "one" style on one map and a completely different style on another creates a polarized dynamic that is impossible to balance. For balancing to work properly, you want multiple playstyles to be viable on one type of map. If you mess with the map standard, of course certain units are going to be more powerful in close quarters and other units will be more powerful in long-distance games (and in your case, navy would of course be stronger in island games). Maps are the metric we measure balance by. If you're dramatically changing that metric, how are we supposed to balance the game? In addition, a lot of players would view these maps as "uncompetitive," just like how people view the macro-style of play as "boring, but it works, so I have to play that way."
Top

I gave it a try. Please check out this map here. 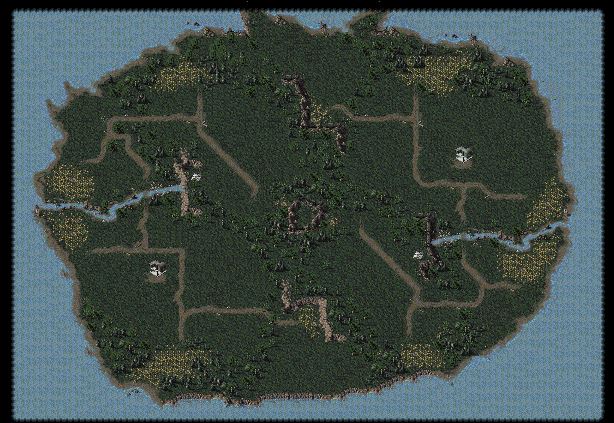 Thanks for all the answers. I'm glad you mostly understand my point.
The balancing should work on all kinds of maps, because players like to play all kinds of maps and not only the official RAGL maps.
I don't say standardized maps are bad. You need them as metric to compare and the metric has to be static and not dynamic. I totally agree there.

Keeping things out of the maps, to simplify, the balancing process is clever and no mistake, but keeping interesting game dynamics out forever is for sure.
When it all comes down to blobs and mass expansion then there's something heavenly wrong.
It's out of question that the macro play style is the dominating one -> the metric is one sided.

Add some micro featuring maps to equal things out.
I guess it's close to impossible to have a set of 50% micro / 50% macro ratio maps anyway.
If we wholeheartedly improve the maps metric, we will also improve the potential of balancing and enable more variations in tactics.

Plz, don't imagine maps that are 90% :10% in favour of micro, or like having only 2 sets of macro/micro ratios.
Better imagine taking an interesting micro dynamic and cross breed it with the style of a RAGL map.
Finding great examples with that criteria isn't easy. They might simply not exist yet.

Block temporally or completely this mass expansions running and/or huge blobs engagements and you will enable all kinds of micro game dynamics.
Small maps are just one way of doing that and other solutions has been already suggested. Thanks !

I'd like to add here some more:
- deadly mines,
- captureable neutral turrets inside ore fields as alternative to the oil derricks
- important bridge that can open up, or close effective choke points
- lonely oil derricks that are blocking the space to deploy a conyards at expansions.

If micro style if using few units on a low eco map, i just had a micro game. i surrended out of being bored with map control and more eco but i was tired of just trading artie with hinds and trade hinds with aa gun, waiting for gps and why not trying a longbow when aa gun can't reach a hind. ... Even tanya was pointless due to pillbox spam and artie everywhere.

i saw you play yellow and you beat me hard couple of time, your micro does the difference even on a macro map. Gameplay is evolving, everybody needs to adapt. For now, it's large army, several expention and mass infantry the popular way, doesn't mean it's the only way or even the better way, it's the most effecient until someone prove another style better.

I was able to counter that style with demo truck few army and IC (and i lack the skill to do it proprely, i need more time), you were able to counter that with few artie, chinnok+tanya and all sort of backline crap (crap in a good way, more it annoys me more it's awesome). You had a good run vs Happy on cast with micro in a macro map. So i don't think micro is outdated or does'nt suit macro map, it's just now harder to pull of and need to be play alongside the macro way.

Soscared playtest is bringing forward vehicule prodution and vehicule stats, what playstyle will get out of it ?

What will be tomorrow ?

Edit, micro needs a hell of a ping, I still don't figure how i can micro a shit when an order is applyed 1 or 2 sec after the click. i can't anticipate what i can't see and 1 or 2 seconds are enought for anything to die painfully when something shows up. I tried on a ranger, pressed S and it took 5 cells to stop. wich is kinda a lot between the order and the execution. So we are not all even with micro fo starting.
Top

@Doomsday
Nice map, it's open (5 choke points), but considering the low ore it might work great.
have to test it

@Smitty
Ya, some of them are still RAGL-Style playable

@SirCake
lol "westwoody" is a good description. You totally got me.
But these are extremes. Adding only some elements of them could be enough.
btw. great example!

yellow (theRaffy) wrote: ↑@Doomsday
Nice map, it's open (5 choke points), but considering the low ore it might work great.
have to test it

Thanks. This new revision of the map has 0 games being played shown in resource center. So yeah it needs some testing.

If you didn't notice this map in my other thread, here is another attempt at small map. More chokepoints this time.

The more macro-focussed a map is, the more micro you need to turn it over. However I still feel that good micro can easily turn games on any map. It could be hard to see, but it feels like even the top playersâ€‹ can micromanage armies a whole lot more.
Playlist with ALL games of the Dark Tournament Youtube.com/CorrodeCasts
Consider supporting OpenRA by setting a bounty or by donating for a server
Top

The difference in spending clicks on micro does not win you the match, when you opponent is a good macro player.
Anyway I guess I'm just tired of that screen filling blob engagements.

@doomsday
I played jimy's revenge2 ~5times, lost some and won some. driving in the middle is a bad idea btw.
didn't play Uncanny Valley yet-

@Wippie
heroes is also a nice map, very interesting, I had doubts about too much wood but, it's good playable and the expansions create good tension.
Top
Post Reply
32 posts