Please vote "I'm in!" for the poll if you wish to participate, then drop a comment so I know who to add to the WDT list.

Also, check Murto's comment below this, that's the idea we're going with.

I'm thinking of a tournament, or league, that will be playing on a giant world map. This would be epic if we got a large chunk of the community in on this (I'm thinking, at least 100 players)

Each player will be selected at random to take a starting spot in one of the countries.

For bigger countries, multiple players will take spots, and be a team.

The single players may need to get diplomatic and form an alliance (think European Union) to survive.

I'm not sure how to make this work yet, but I was thinking players could either fill in for dead players, or let countries be conquered. To keep it ongoing, maybe the data can be synced with the master OpenRA server, so if people don't have time to finish, or they disconnect, the match will end, and they can pickup where the left off when everyones ready again. All units structures and whatever would be where they were when everyone left the match.

Or maybe a yaml file that can be saved on everyones computer that stores that data, and sync it with the master server, so if anyone tries to change something, it'll desync.

It could even be turn based. Players will go to war, one country at a time, one player at a time (larger countries with multiple people, they will go one at a time, and for alliances, same thing, one person at a time), and receive 5 minutes to do as much as they can.

By one player at a time, I mean one per country.

So if two countries are war, no matter the size, only one person per country per term for the 2 warring countries.

Both players will battle at the same time, in the same 5 minute period.

Chances are, you won't kill the other player in that time. Which is fine. This allows more time to strategize and think (almost like real time) and hopefully come up with a kick ass plan.

So what do you guys think? Got any ideas to make this work or make it better? Anyone interested in something like this?

This is something that could weeks, even months, to complete.

It could even be done where only 2 people are needed on the map at any given time, if not everyone can make it, those 2 players will battle it out, and the data will be synced to the master server, then synced to the players the next time they go to play.
Last edited by CatGirls420 on Wed May 09, 2018 1:38 pm, edited 2 times in total.
Top

There are many performance issues with large maps and plenty of IRL issues for long games with no expected end. There are also technical challenges you will have to overcome if you want to make this happen, such as the lack of saves and filling in for dead players.

An alternative is to take the "risk" approach. Cut up a world map into small (conquerable) segments (countries) and give each player (nation) a selection of these segments. Players take turns choosing a segment controlled by another player on their borders and play a match on a map representative of that segment (maybe you can have an attacker/defender spawn). When an attacking player wins they own (conquer) that segment. The player to conquer every segment wins the tournament.

To keep things interesting you could have nations comprised of many players or a player is assigned to each segment, fights only in that segment, and joins the team of whoever owns the segment.

Theres a lot you can do without introducing all these technical hurdles and I think this would be fun to watch (though tiring for the players).
Top

Wow. Your suggestion crossed my mind but I threw it away because I thought people would've thought it was stupid. And now that you've just said that, I don't feel like it's a dumb idea anymore. Look at you haha

Does anyone else agree with Murto?

That's the perfect route to take.

@Murto yeah I'm not sure how I want the timing to go, or the "feel" of it. If everyone can accept it'll take possibly months, and just play it as a side-game/tournament, I'm sure it'll go smoothly. And, over time, the prize pool may even increase. If that happens, longer tournament = more prize money.

I might start writing up all the details today. I'm pretty good at recreating countries with map editor, so it should be easy.
Top 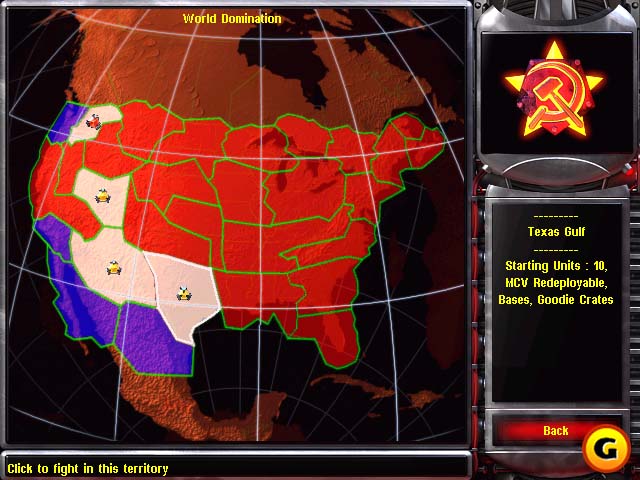 Oh! I remember that! Wow, would be easy for all of us if the OpenRA2 mod was done and ready :p

I should create a poll so i know if people will play or not.
Top

or atleast quite similar
Top

Oh wow. Dude that's awesome. We should try to get something like this going.

I like your and JOo's ideas. I know RA2 had World Domination mode (as seen in the screenshot I posted above) and it was a lot of fun back in the day. Have you guys played it before?

As a point of reference I will try to remember exactly how it worked.

I think there would be a map of a continent, and it would start off half controlled by allies and half controlled by soviet. There would be maybe 3 points of contest per day (apparently 4 since I just looked at the screenshot I posted lol). You could fight as Allied or Soviet and choose one of the contested territories as your battle ground. You would then get matched vs a commander from the opposite faction who also selected the same territory to battle. I believe at the end of the day, which ever team got more wins per territory would win that territory. Then the next day, the contested territories would move one spot further in whichever direction the battles from the day before determined. This would go on & on until one faction claimed the entire continent. Then it would cycle to a different continent entirely.

I was never exactly sure if the maps were predetermined per territory or if they were randomly generated in some kind of way.

Maybe there is someone who knows more/was more experienced with this mode than I am? Anyways, maybe seeing how Westwood did something similar back in the day can help influence how you would want to achieve this :-)
Top

That sounds great, but the poll isn't looking too good right now. And, it doesn't seem like many people are interested.

CatGirls420 wrote: ↑That sounds great, but the poll isn't looking too good right now. And, it doesn't seem like many people are interested.

maybe they dont think its a bad idea.. maybe they are just scared :-)
Top