Aircraft in For of war vs Infantry

Aircraft in For of war vs Infantry

Am I the only one who doesn't like this? 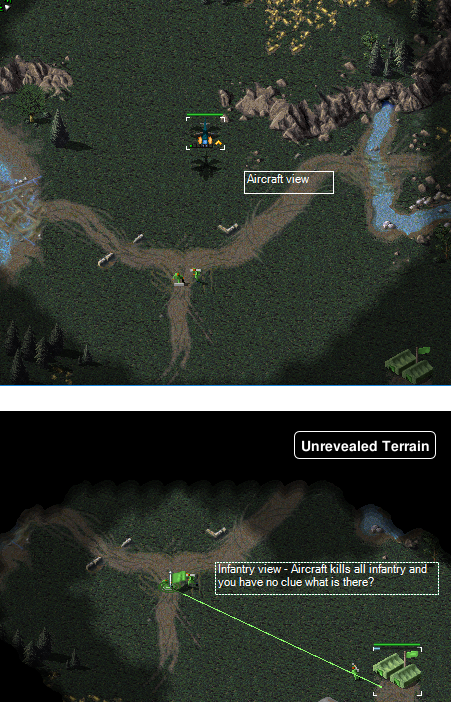 Welcome in BlindRA the game where you have to guess what to do because you can't see.
Top

This is solved in the D2K and TS mods by having units reveal themselves when they fire on a target (using the RevealOnFire trait), like in the original games. There has been some discussion about adding this to TD too, but nobody wants to deal with the consequences of trying to add it to RA.
Top

I can't see the problem with it. Also it allows for Hinds to snipe rouge rocket soldiers on the field.
Top

I had a conversation in discord a week ago about the issue that not only there is no notification about your units under fire apart from firing sound (that's understandable given there would be too much of those), but when this firing is out of vision you are not even able to guess where it happens because animation could be several bleak pixels. So if you have lone riflemen stationed around the map and one of them gets fired at you have to manually check all of them before he dies.

So RevealOnFire actually looks promising, it should not be a lot of vision (maybe even 5 cell sector is enough) not to reveal too much around the firing unit. Because scoutillery will have another meaning

RA being such an infantry heavy mod ought to allow for higher tier units such as aircraft to fully dominate them. Lone walker infantry units being picked off from undisclosed positions seem to fit right into the game.
Top

Is it possible/difficult to update some maps with RevealOnFire and add them to Resource Center? I would like to play/try it.
Top

The problem in RA is infantry are already strong, so weakening hinds is just going to throw balance issues into the mix. When Hinds are on the field a good player will adjust and counter with AA options asap. But those rockies with some extra line of sight will take down the Hind a lot easier.
Top

It is interesting, it applies to more units, defenses,..
You can adjust radius or duration,..
Top

SoScared wrote: ↑RA being such an infantry heavy mod ought to allow for higher tier units such as aircraft to fully dominate them. Lone walker infantry units being picked off from undisclosed positions seem to fit right into the game.

I like the fact Hinds can situationally act as infantry counter but outranging infantry would feel better to play instead of "outvisioning".

Actually nevermind that would be impossible because someone decided all our units have worse vision than range.

Any change to this (increasing vision for inf or reveal on fire) will kill advantages by rangers or dogs, basicaly downskilling early game.

Hinds are strong, because they are fucking strong, not because of infantry vision.
Check out Dune2k-Advanced on my moddb page!
Top

For the TD side of things I know its been discussed about other situations for RevealOnFire with units. I played several games (With the modified skirmish mode in TFD) of CNC95 to get some ideas and handles on unit reveals.

For this idea im willing to discuss further in IRC on potential problems that could occur but also make note on the pros that it could provide.
Top

SoScared wrote: ↑ Actually nevermind that would be impossible because someone decided all our units have worse vision than range.

Probably one of the things that makes me maddest.


I reckon reveal on fire is amazing except around artillery etc.

@Anjew: You finally did it. You quote spammed a hole into another dimension.
Top

Faintly related, the newly added RevealOnDeath trait could highlight the kill spot for a few seconds.

This is something I've fantasized particularly with Yak crashes as you'd be able to see its impact.

In general it would simply function as a notification to where your units were located last and in some cases reveal enemy units passing by the kill-spot.