Discussion about the game and its default mods.
Post Reply
75 posts

Gotta disagree with most of those claims again. A sub will likely kill 2 PT boats too. The PT boat price of $500 is justified considering how awful they are.

For comparison:
- A sub will likely kill the harbour in 4 torpedo salves and about 12-16 seconds?
- The PT boat can barely scratch the harbour, especially if it's under repair, it'll probably take like 5 minutes to kill.

- If a PT boat chases a submarine and manages to get in front of it, it can throw 0-1 waterbombs before it likely dies. The torpedos hits faster than the water bomb over 1 tile distance or whatever distance.
- The submarine normally doesn't need to chase all that much, they're intended to snipe and should pick still targets. (Most boats do stand still for most of their life time.) Firing into a blob of boats the're still absolutely lethal.


Subs have longer range even than destroyers, with sat they turn twice as lethal.

All in all I think your idea that subs are underpowered is totally not realistic.


WhoCares wrote: ↑Subs not having to uncloak to shoot

Might be a good idea, I'm 50/50 on that. Pro because realistic, and they could still be found by boats. I don't think this would change much in gameplay.. con because subs are already quite powerful imo.

EDIT: In contrary I think PT boats are mostly a useless unit. If you gave soviets PT boats too, I think people would still rather use subs. PT boats can barely scratch inf, vehicles, buildings.. the only thing I ever really attack with them are oil rigs very early on. Besides that, only water their bombs are marginally useful. Imo they could easily be given to both sides or redesigned into a paperthin AA-boat.
Top

Maybe only for inf. That would be a somewhat useful counter against the chronosphere. That'd be a t3 unit obviously.
Top

I mostly agree with you. I know other discussions have happened, but I still think the Hind, Chinook (Transport Helicopter) and Helipad should be available to the Soviets. They had all these available in the original and I don't understand why they don't now? The Hind and Yak do the same thing, so what, so does the light and medium tank arguably.

The light and medium tanks arent comparable because the light tank only requires a war factory to build, but the medium tank requires the war factory and service depot. This affects the order which players build, because you can build radar, helipad, war factory, giving you light tanks and helicopters in the early-mid game, or you could build war factory and service depot first, which delays how long it takes to get aircraft but gives you access to bigger tanks in the early-mid game. Yaks and hinds dont compare as well becaue you have to build an airfield, which also gives spyplane and paradrop/parabomb, or helipad to get a unit thats alost identical. It might be useful if one appeared earlier in game, but do we really want aircraft appearing earlier?


By no means should the Allies lose the Hind... it should be available to both. If you want to rename/put the new art in that was created for an Allied alternative to the Hind that would be fine.

Not really. Part of what made command and conquer fun was the difference between the units on each side, giving both an identical armed unit goes against that.


Also can someone explain why the Allies do not have the APC and why the Soviets do? If you want to stray from the original, sure give the Soviets an APC, but why don't both teams have it then? It's ok to have a generic unit shared by both teams... (Rifle Infantry, Rocket Troops now...)

It creates redundancy. Both teams only had one infantry transport in the original (although an amphibious apc would have been better, maybe even an amphibous flak track to cover AA naval).

Lack of rocket troops on both sides was a pretty major oversight by westwood, since it meant one team had low tech AA and AT infantry and the other didnt, later command and conquer games solved this problem by adding in futuristic units like rocketers, jumpjet infantry, guardian GIs and tesla troopers (basically early game shock troopers) and tiberium dawn solved the problem by giving both teams rocket infantry. Those newer infantry wouldn't really fit into red alert, so the only solution i can see is give both teams rocket infantry.


as many have said before, the Hind is an iconic Soviet aircraft, so it makes sense to just give it a name and graphics swap but keep all gameplay stats identical.

Agreed. The Apache is an american helicopter, built just a few years after the hind, so someone could literally use the TD apache graphics.
Last edited by fernoe on Thu May 04, 2017 9:50 am, edited 1 time in total.
Top

This thread is just turning into a cycle of "no i'm right, you're wrong."

Instead of having a pissing contest over who's right and who's wrong, what to add and what not to add -- why don't you take some time to actually test Blackened's changes before trying to add or remove anything?????? He spent a good chunk of his time trying to thoughtfully balance the naval units, and all you guys are just ignoring the SEVENTEEN maps that he has made for you guys to try out.

I think he's gotten enough "ideas" from you guys. What is more important now is direct, first-hand feedback for his playtest.
Top

OMnom wrote: ↑This thread is just turning into a cycle of "no i'm right, you're wrong."

Instead of having a pissing contest over who's right and who's wrong, what to add and what not to add -- why don't you take some time to actually test Blackened's changes before trying to add or remove anything??????

Well this is a discussion so I figured, having the counter opinion, I'd raise it. Like everyone else I approve of his considerations.

However I made a pretty good list of why subs are superior, it's not "I'm right you're wrong", it's pretty hard facts that a sub can kill a yard fast and a PT boat almost can't do it at all. Most of my other points are factual too. Most players I have talked to agree that water is one big pro for soviets. Therefore, for me, it seems pointless to see the "balance fix" for this "issue".

I'll lay low for a while now, I've said everything I had to say I guess. Imo the basic premise of a naval imbalance is fictious. Naval combat could be improved, but imo it's quite balanced.
Top

Interesting. Most players I know honestly think allied navy is superior compared to soviet. I wonder if this different opinion is caused by different type of maps or different skill of players - or both.
The supreme art of war is to subdue the enemy without fighting.
-Sun Tzu
Top

OMnom wrote: ↑why don't you take some time to actually test Blackened's changes

To that end I plan on being on a lot this weekend for anyone willing to help test out.


generalmelon wrote:Well this is a discussion so I figured, having the counter opinion, I'd raise it.

Wouldn't want it any other way.

Testing the changes compared to the current status will no doubtingly prove which is better.
Top

Doomsday wrote: ↑Interesting. Most players I know honestly think allied navy is superior compared to soviet. I wonder if this different opinion is caused by different type of maps or different skill of players - or both.

I think some people think soviet is stronger (maybe) because they do have an advantage very early game with the ability to destroy a naval yard quite easily. Soviets do miss not having a destroyer equivalent however, and I think the subs do need more of a defence against helis.

Let's imagine that soviet navy is improved. Maybe then sub ping could be available on a countdown from getting a naval yard. You hardly see it at the moment.
Top

What about a underwater Transport ship for soviets?
Top

I don't know any pure naval 1v1 maps. I made one for testing early t1 naval balance and micro. I don't know modding so I can't make a version with Blackened edits.
The supreme art of war is to subdue the enemy without fighting.
-Sun Tzu
Top

If Soscared or anyone happens to remember the map with the islands with creep dogs on them and the 4 corners were designed for 2v2v2v2 or 4v4 and can send a link I'd like to add that map too.
Top

By the way there is a major flaw in naval balance that hasn't been mentioned in this thread yet. Whenever a submarine or missile sub is finished from being built, it makes a sound your opponent can hear.

My initial thoughts on changes. Hinds act as a sub counter worse than before so good job on heavy armour change. Still, soviets need to tech up to tech center until they get access to anti-air on sea. Also, soviet player who wins naval can't do anything with his naval control until he techs up to tech center and produces some missile subs. I will hopefully comment in more detail once I am able to test more.

In my map Duel Islands allied players can harass some things with just their gunboats (see attachment). I wish there was something for soviets in radar dome tech being able to attack air and land. I would maybe consider changing missile sub tech level to radar dome. And then maybe introduce a new high tier soviet naval unit. Fortnight's red alert mod had nuke sub for Uzbekistan. Alternatively soviet Sea Scorpion from RA2 with flak gun requiring either war factory or radar dome. However, all the suggestions in this paragraph are quite major and hard to push in. 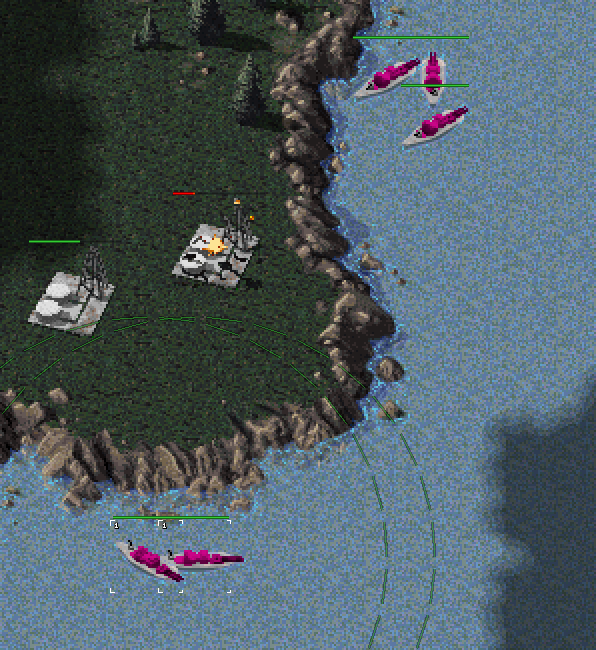 If you just change the tech requirements for something, it's far less of a change...

I agree with the suggestion above. That it's worth trying anyway--

Would soviet navy be OP if they could build missile subs from radar? It's possible that could work. Yes they are long range but I'm not sure a couple of them can do that much damage in the mid game to make things unbalanced.
Last edited by zinc on Sat May 06, 2017 1:19 pm, edited 3 times in total.
Top

OMnom wrote: ↑A lot of map makers have tried various techniques to get naval to be more worthwhile: adding more starting ore, creating a super valuable island accessible only by navy, putting a lake in the middle of the map...all to little or no avail.

The "Portent" experiment is not over just yet! (And that other map that's in the works after I alter those bridges).
Top

I have recently made my first naval modmap, i made Soviet Subs able to fire double Grenades to ground targets which has range of 5, so Soviets can damage shorelines in early game too, but still too short range to do much. I'm not sure if this is really a good approach tho.

I'm not really a fan of adding a new unit to Soviets that is not a Sub. Their naval facility is called a Submarine Pen afterall, even tho they can build Transport boat too.
Top
Post Reply
75 posts