Discussion about the game and its default mods.
Post Reply
31 posts

I think I can be considered a mapper now

In this thread I'll be sharing my maps to advertise them better. I primarily create competitive maps (1v1 or 2v2) for the Red Alert mod. In doing so, I try to make them as balanced as possible (which means they're not always pretty). Here I'll be posting only the maps that I consider to be good.

I'll be marking finished maps with green and maps that are still in development with blue. So please play (share replays) and leave your feedback. It will help me to finish them. 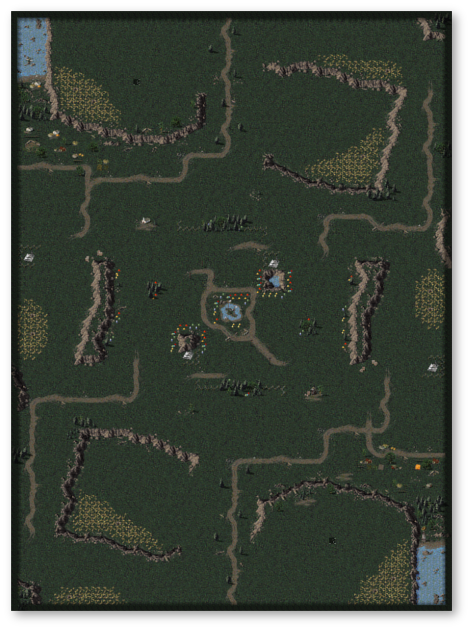 A 1v1 map which forces players to use navy (non-aggressively). This is probably an Allies map, but still, we lack decent 1v1 map where you can win games with ships. A non symmetrical 1v1 map where navy is encouraged. Further experiments with 1v1 navy. The island in the middle has gems (connectable by 2 bridges). The idea is that players should fight for it. The name is inspired by Megaton from Fallout 3. The map has custom rules: there's a nuke truck in the middle. It has 10000HP. When you kill it, the whole town is destroyed and you can start mining gems from 2 mines. The rest was not touched. A simple 2v2 map for brainless games. Inspired by Sidestep, but turned out to be a Tournament Island kind of map with 4 islands. Each of those islands has gems. An experiment where the island players (in the middle) need to fight for the island and limited ore and escape it as soon as possible via a transport to gain control over the top of the map. The bottom players are there to support them. Next iteration of BtV which makes the map far more open. The map also solves the problem of walling off the main base in the beginning. I never wanted it to work like that and it always bothered me that a lot of players just wall off that entrance. Now, you can also block it off with a wall, but you need to spend some efforts to mine blocking ore first. I consider it an OK move because now you need to do something to build defence. Previously, you could defend that entrance for free, without any investments ($50 for wall is a joke). Those are excellent competitive maps!

I'm afraid I will always stay a noob mapmaker

I tried Destiny with Yellow, and it was fun, thanks Kyrylo! I think I like it better as a 1vs1 map, it always felt a bit small and static for 2vs2.
Top

klaas wrote: ↑I tried Destiny with Yellow, and it was fun, thanks Kyrylo! I think I like it better as a 1vs1 map, it always felt a bit small and static for 2vs2.

Thanks for trying. Mind sharing the replay? This edition of the map is pretty new and untested, so I'm curious how it plays out.

It used to be a 1v1 map, then I modified it and added more spawns because players were complaining it's too big. And now I decided to make it 1v1 again because SoScared has been promoting big 1v1 maps and it works quite well so far.
Top

Uploaded the second game to gamereplays.org:

Uploaded the second game to gamereplays.org:

Thanks for the replays. I just watched them and I think the map is OK at the moment.
Top

Just made a brand new map! It's called Chitzkoi Playground, see the original post for the link and the screenshot.
Top As we discussed today, it's a very fun map, I loved it. It allows all kind of battle possibilities, especially opening a double naval front. Germany definitely becomes interesting on this map, with chrono tactics, crossing between islands and obstacles. Ukraine with landed demo trucks, and airstrikes, etc ... I think this map has a lot of potential !

A bit of critique I gave you earlier : it seems that the map is a bit choky, in the water corridors as well as the the ground passages :

Maybe with an arty camping player, ground corridors would be difficult to cross for a soviet player. But then, the middle is not quite strategically important to hold, it's only a question of crossing into the enemy base. So maybe it's not that of a big deal.

Same for water corridors : soviets seem to be OP there, with subs and teslas. But the limited width also allows for a better micro against subs (they can't hide in a tiny water surface), so IMO allies and soviets are quite balanced on the water.

So, maybe a tiny bit more width in the water & ground corridors, and it would become perfectly comfortable.

Also, I'd remove the 1-cell passages (south-end, and mid derrick). It feels very choky for the mid derrick. And the south-end passage doesn't feel right to me

it looks more like the secret passage that everybody will forget about, or that will be walled with a horizontal undestroyable wall. Doesn't add much to your map, I guess.


But in the end, definitely my favorite 1v1 map of the moment ! Good job !

Thanks for playtesting it and providing great feedback! I made the water corridors wider. The map is taller by 8 cells now. Good news is that you still can use chrono tanks to travel across islands.

As for the secret bottom passage, it's intended for rangineers and flamer APCs (or Tanya inside Phase transport, for example). It's definitely possible to wall it off, but as you said, you can forget about it. I think it's essential to have it, so you can bypass defences that will inevitably be in the middle, where the ore is.

As for the middle derrick, it is indeed choky, but I think it's not a big deal, since that derrick will likely be destroyed in the first 7 minutes of the game. I'll consider making the passage wider, but for now I'd like not to change it.
Top

Thai Bay is a much better attempt than mine

there are a few concerns I have. I saw someone saying that people might try to end it before the island expansion. There are other concerns that I think need solid game play to prove or disprove. So I'll have to play some!
Top

Great idea Kyrylo. Nice to be able to see your write-up on maps and to follow what you're working on.

I especially like Behind the Veil. First saw it with FiveAces streaming some great matches on that map.

Personally I understand why maps have to be some-what symmetrical but seeing completely symmetrical maps is not very nice, so I know it can be difficult to come up with something nice.

If you are doing any map requests, I would love to see some big team tournament style maps like "Pressure" and "Haos Ridges"
Top

Blackened wrote: ↑There are other concerns that I think need solid game play to prove or disprove. So I'll have to play some!

Thanks, sure give it a go!


Concret wrote: ↑ Great idea Kyrylo. Nice to be able to see your write-up on maps and to follow what you're working on. I especially like Behind the Veil. First saw it with FiveAces streaming some great matches on that map.

Thanks! I am currently working on Thai Bay and it's almost finished (if not finished now).


Concret wrote: ↑ Personally I understand why maps have to be some-what symmetrical but seeing completely symmetrical maps is not very nice, so I know it can be difficult to come up with something nice.

I am not very good at making asymmetrical maps, so symmetrical maps is my style. I usually create only competitive maps and try balance the map so it's equal for every faction and spawn. Unfortunately asymmetrical maps make this goal extremely complex. It's harder to test such maps, too.

If you are doing any map requests, I would love to see some big team tournament style maps like "Pressure" and "Haos Ridges"

Thanks! Unfortunately I don't do map requests. I am also not good at making team maps and it's a really complex task, since I am obsessed with making everything balanced and team maps are large, which means more editing (not fun).


Thanks everyone for the feedback. So far I am really impressed about Thai Bay, how smooth it is. It's probably my best map so far. I've made some changes to the map (been a few iterations). The map is now a little bit taller and a little bit wider. The bottom hidden trail is now wider, too. I've redesigned the side derrick areas. The cliffs now protect the spot for possible shipyard. Updated the screenshot and link in the original post.