Discussion about the game and its default mods.
Post Reply
10 posts • Page 1 of 1

I did forum search and I did not find any mention of this unit been requested to OpenRA arsenal so I am requesting this. I tried this unit in vanilla RA Aftermath after some aftermath.ini editing and it was actually quite fun to use so I think it would be good addition to OpenRA. 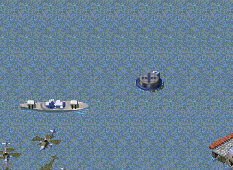 Not sure if the engine supports this. I have two ideas. Patches are welcome.
Top

This would require a LOT of testing to be a balanced addition, but it could work quite well. It was removed from standard build rules in RA95 because it was a gamebreakingly cheap unit.
Top

Aircraft carrier for the soviets would be great to counter this on island maps.
Top

Just came up with something: you can make a naval unit that transforms into an immobile water based helipad on right click. Not tested if this works or how glitchy it is.
Top

That thing looks horrible; for starters, it should probably be much larger.

I think its interesting, I'm all for adding new content,within reason of course no point having 76 different inf units

. The fact that its an unused / hidden unit from aftermath just makes it more exciting