For those who have been around for some time (see date when this thread was posted) and/or regularly check the resource center this is probably nothing new, but here goes:

TD Navy is a set of mod-maps that mainly add buildable naval units to the game. Balance and units are intended to be different from RAs navy and feel like they could fit into TD, had it ever had a navy component.

Tiberium Mining and Processing: (Optional, only available when any techlevel with the suffix "TibMines" is enabled)
These function both as buildable Cash Tricklers and Silos and are very explosive.
Originally added when there was some debate about "useless silos" going on, I have by now grown wary of easily buildable cash generators, but since they were in Navy for a long time, I have opted to make them optional instead of outright removing them.

Ship Yard:
It looks like the Allied Shipyard from RA and behaves like it: Repairs and builds GDIs ships.
NOTE: Ship-queues are listed under the Vehicle Tab, since it's impossible to alter the UI with mod-maps.

Sub Pen:
It looks like Soviet Sub Pen from RA and behaves like it: Repairs and builds Nods ships.
NOTE: Ship-queues are listed under the Vehicle Tab, since it's impossible to alter the UI with mod-maps.

Coastal Gun:
Powerful artillery turret - against naval units. It can fire at ground targets but its effectiveness and range are vastly reduced. Amphibian units (even in water) will be targeted like ground targets, making it potentially possible to slip by.
Will detect and destroy submarines.
Strong vs Naval units
Weak vs Aircraft

AAV (GDI only):
https://en.wikipedia.org/wiki/Assault_A ... us_Vehicle
An amphibious troop transport armed with a grenade launcher, it is similar to the APC, with the main differences that it can move through water and not fire at air targets. The AAV should be slightly stronger than the APC (especially against buildings).
Strong vs Infantry, Vehicles
Weak vs Tanks, Aircraft

Hovertank (Nod only):
Rather fast unit armed with a laser that can deal lots of damage to most ground targets. Speed is not affected by moving over water.
Strong vs Infantry, Vehicles
Weak vs Naval Units, Aircraft

Landing Craft (GDI and Nod):
Transports troops over water and rivers. Can move on land but is much slower. Also functions as a naval engineer of sorts, being able to capture Oil Platforms - they get used up by that, so unload them first.

Gunboat (GDI only):
It's supposed to be that one ship from the campaign. High scouting range, able to detect and attack submarines, as well as aircraft, this is an all-round unit.
Strong vs Submarines, Aircraft.
Weak vs Ground Targets

Battleship (GDI only):
With its highly powerful railgun, this ship outguns pretty much everything - if it manages to target it. Low scouting range make it reliant on support units and it can not defend itself against submerged units or aircraft, but with its high weapon range it is also quite good at pummeling ground units. Weak against buildings and Coastal Guns.
Strong vs Ships, Ground Targets
Weak vs Aircraft, Submarines

Missile Cruiser (GDI only):
Artillery ship. Very high range, but very slow rockets. One of the two naval units to outrange Coastal Guns.
Strong vs Slow Targets, Buildings
Weak vs Everything Else

Submarine Turret (GDI only):
It's a submarine, it's a turret, it's both! Move it to a desired location and then deploy it. Will be defenseless before deployed, but once it is, it behaves like a generel-purpose turret that can cloak and even be repaired like a building. Deployment time is kind of long and it is both visible and defenseless during that time. Pretty high submarine detection range.
Strong vs Everything after deployment
Weak vs Everything until deployment


FLAK Submarine (Nod only):
Submarine with a FLAK cannon. This isn't some flimsy pea-shooter FLAK, this is one of those WW2 Anti-Tank FLAKs. Destroys aircraft and ground targets alike and with its range and damage it is comparable to the GDI Battleships younger brother that needs to hide when he shows up. Needs to surface to fire.
Strong vs Aircraft, Ground Units
Weak vs Anti-Submarine Units

Attack Submarine (Nod only):
It looks like RAs submarine and behaves mostly the same, except that this one will not surface while firing, staying cloaked all the time.
Strong vs Ships
Weak vs Everything else

Missile Submarine (Nod only):
It looks like RAs Missile Submarine and behaves mostly the same. One of the two naval units to outrange Coastal Guns.
Strong vs Buildings, Slow Targets
Weak vs Everything Else


Other Changes:
- Apaches and Orcas can detect and attack submarines.
- Tech buildings can be recaptured after being destroyed.
- Infantry staying inside Barracks/Hand of Nod range circle will be healed (click on the buildings to see it)
- Various additional crate effects (including two types of airstrikes)
- Crates will be dropped by neutral C17s, rather than just popping up

Feedback (especially in regards to balancing and bugs) is appreciated. 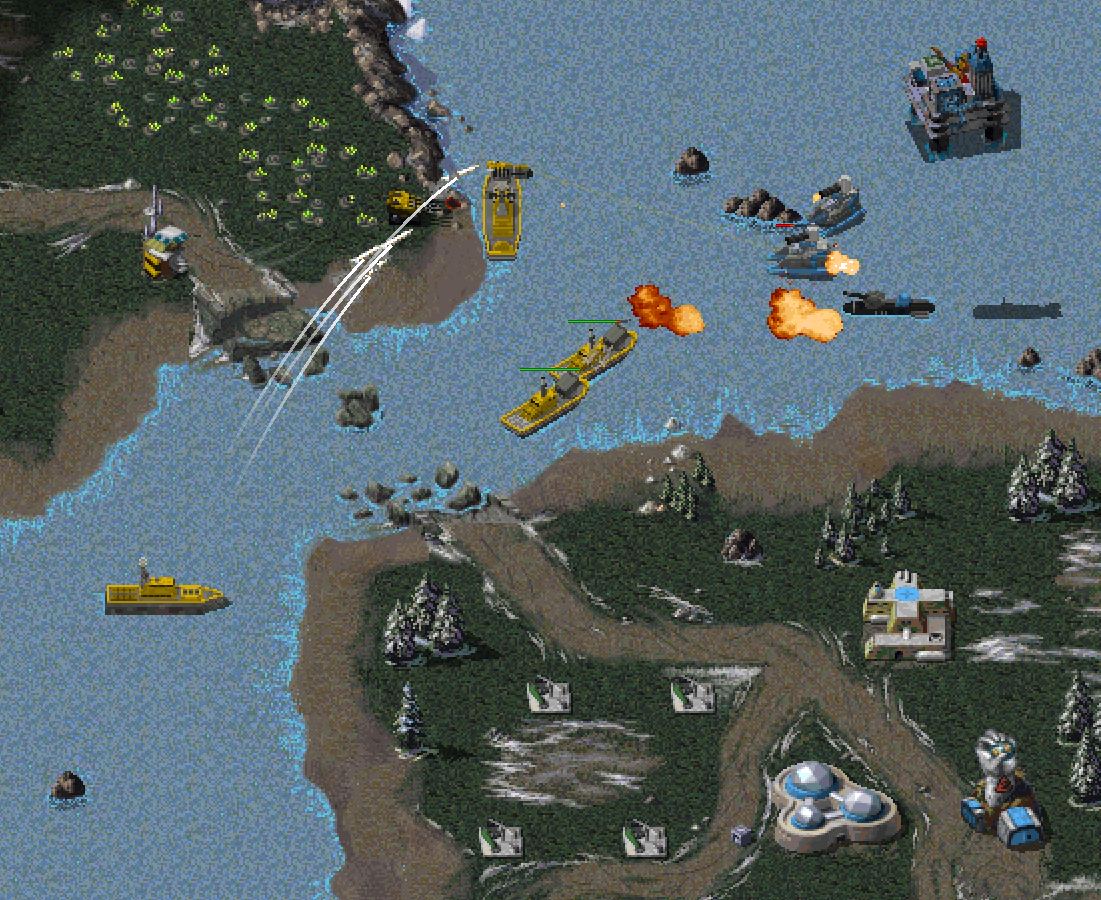 Updated the original post, since it's back again.
Top

I wonder if the naval oil platform would be considered alright to port into Red Alert. No idea how it could be captured though... Unless it had a surface for landing?

Edit: I read the post clearer, so a landing craft captures it. Interesting.
Top

Thats true, in older versions you had to load the transporter with an engie if i remember correctly.
Top

where the hell do you put the maps?