During league stages, there will be 2 games per match, which are each worth 1 point each to the winner.

During knockout stages, the number of games is shown on the diagram.

b. Picking a Map

There are no bans, and any single map can only be played once per matchup.

The map pool is as follows:

All games must be played on a TDGL server, while logged into the correct forum accounts, with the following settings:

If both players agree these settings can be deviated from in any way. Both players need to confirm in in-game chat for each setting so that it's in the replay.

A game is won when the game says it's won. So to win you will need to destroy all enemy structures, or get them to surrender.

If they leave the game before it's over without surrendering, you can safely disconnect and still get the win, but do not surrender.

The result of a disconnect can be decided between the players, but league officials may need to be informed to correct the standings on the site.

Generally if it's not clear who is winning, the game should be played again. If there's a dispute, you can ask an impartial league official to decide.

The "league" will take part in 2 stages. The first stage will be a group stage, where the leading two players of the group will earn a place in the knockout stage.

During the league stage, each player plays all other players in their group in order to aquire the most points. Players are then ranked in order of points.

At the end of a group stage, if there is a two way tie that needs to be settled to determine who advances, a best of 3 will be played, with the first map being Matchpoint. This match will then follow normal knockout stage game rules.

If the group stage results in a three-or-more-way tie that needs to be settled to determine who advances, a smaller league of the tied players will be run, whereby each player plays 2 games against each of the other players to aquire the most points.

This will continue until there is a clear 1st and 2nd for each group.

The knockout stage will consist of matches where the winner progresses, and the loser is knocked out. There will also be an additional match for the players knocked out in the semi-final stages to determine who came third.

There are channels created for you to arrange your matches in the TDGL server, these are #tdgl-s3-recruits and #tdgl-s3-elite, and they are both in the Matches section.

Please use these channels to arrange matches where possible so that officials can keep track and make sure that matches are being played and so that any interested casters can be informed.

The timetable and fixtures are as follows:

This is not an exact timetable, but is an ideal and what should be aimed for. If players drag too much behind or are unreachable, they will be disqualified at the discretion of officials. This will only happen in extreme and clear cut cases.

Players are encouraged to play their matches as timely as possible to keep things running smoothly.

The current prize pool is £50 and $35 excluding transfer / PayPal fees.

The split will be 90% to the winner of elite, and 10% to a random finisher out of the remaining players. This will be determined at random after the league finishes.

Prize winners will be contacted to arrange the transfer of their winnings shortly after they are allocated the prize.

If anything is off, such as a player cheating, being abusive, not being forthcoming with arranging matches etc, organisers may intervene and may end up disqualifying players.

There's also potential for something to happen outside of the scope of these rules, in which case the officials may need to make decisions in the fairest way possible as decided by themselves. 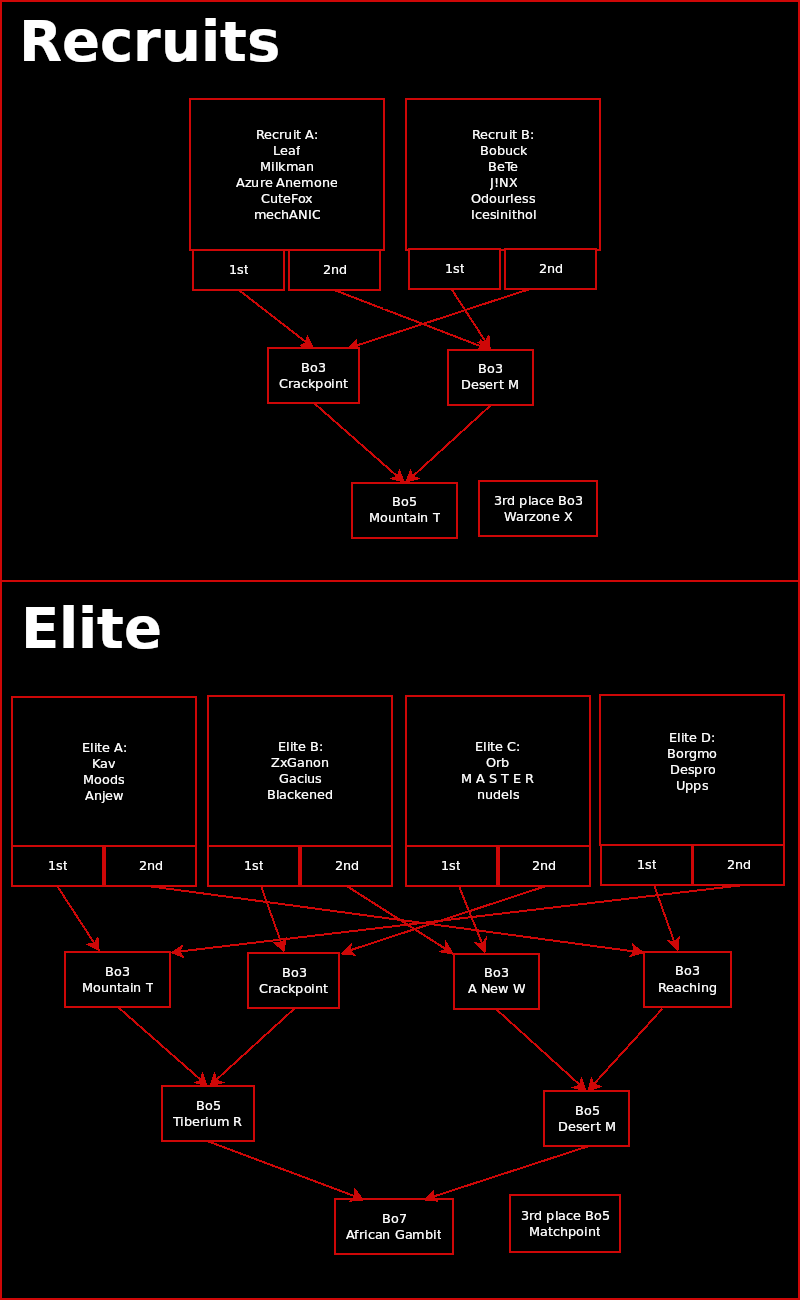