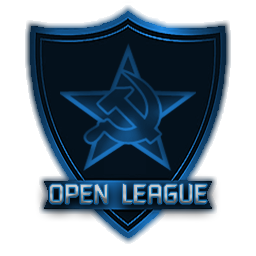 Welcome back, Commander. A briefing on the revived “Open League” is waiting for you.

This is a ~2 month long progressive tournament, with several smaller events leading up to a final, climatic double elimination tournament. Except for the finals, there are no sign-ups required.

Keep up to date on the latest news and events for Open League on the official OpenRA Discord: https://discord.openra.net/

Trials are smaller events leading up to the final tournament. There will be a variety of them and you only need to show up to participate. There are two kinds:

Predictable biweekly events, every other Saturday.

Random events scattered during weekdays, depending on time availability of Kaution or other organizers.

Winning trials will earn you a guaranteed spot in the finals and cards (explained later). 1st/2nd place for biweekly trials, 1st place for random trials to earn cards.

King of the Hill
Queue system. Winner stays in, loser goes to the back of the queue! Winner is
determined by number of victories.
Variants: Played on fastest speed, played on dark tournament maps (shroud on)

Smallest Cage Fight
It’s a free-for-all on the smallest map! No room to build up, it’s a knife fight to the death. There's two rounds. The last surviving player in each go into a 1vs1 B05, winner taking home the prize.

Battle Royale
A progressive free-for-all where friends are important. Multiple FFA’s are played, and the first player killed each round is eliminated from future rounds. For example, the first FFA would be a 6p, then 5p, 4p, 3p, 2p.

16 player double elimination tournament, played on August 28th and 29th (Saturday/Sunday). Sign-ups will go up a week before it starts. Players with reservation cards will get priority in sign-ups, but even players who have not played in any open league event can sign up if there is space available.

Finals Reservation:
Every reward spot earns you a finals reservation by default. This guarantees your spot in the finals.

Queue Pass:
The exception, this card can only be used in trials. It allows you to switch your position in the queue with someone else.

Seed Switch:
Switch your seed with someone else in the bracket. If multiple seed switches are used, they are done in reverse order of when players received their finals reservations.

Map Pick:
Choose the first map in one of your series instead of the default one. If both players use this they cancel eachother out. One use per series.

Elite factions will be available to practice one week before the finals, revealed in an Elite Factions Trial (King of the Hill but with Elite factions available, no cards required).

EMP Tank:
The MAD tank prototype was an utter failure on the field, and the Russians went back to the drawing board. They upgraded it with their revolutionary tesla technology to give it a disabling effect.

Hound:
While the Hound breed was retired from service due to excessive aggression (and several handler casualties), Ukraine has deemed it necessary to resume breeding. The Hound is a strong breed that's tough to take down.

Hind:
Needing to bolster its air forces, Ukraine has dusted off its old Hind models and brought them back into duty.

Royal Marines:
The escalating war has forced Britain to recall their special forces and integrate them into their main armies. Adept at sabotage with HE grenades.

Archer:
Faced with ever heavier armor by their Russian foes, Britain has resumed production of an old prototype tank destroyer.

Chrono Hawk:
Chronosphere miniaturization efforts have resulted in being able to fit a blink pack onto a Black Hawk, the first aircraft of its kind able to teleport.

Fake Vehicles:
Having achieved success in confusing their Russian foes with fake buildings, France has built on this effort by designing fake vehicles. Privately tank drivers complain about driving cardboard boxes onto the battlefield, but they know it is necessary.

Shroud Imploder:
French scientists, having achieved control over the mysterious phenomenon known as the Shroud, have developed a superweapon capable of darkening the entire battlefield.

You will also need a discord account for the finals (for communication purposes).

Standard competitive lobby options, unless otherwise needed for a particular trial. Reusable Engineer ON, Bounty ON.

We will be using the balance changes from RAGL S10.


There will be 6 raffle slots, which will randomly assign 10 dollars to players who finish their matches. We may add secondary achievements (best comeback, etc).

You can ignore the "Extras" part.

Count me in.
Top

Concerned about moods signing up

What is the point of moods signing up? He will probably just get rolled by dang 6-0 again wtf
Top

Let's try not to be toxic, eh? Not really a point in sharing that here.

I've edited the rules for Cage fight to have two rounds.
Top

Re: Concerned about moods signing up

Hahahaha van join cuck.. ill see you there
Also it was 5-1 ffs get it right
Top

I am in.
Duke Bones reporting in!
Top

May I recommend the map "Outward Gumption" for the 6 player FFA. It gets crazy plays for FFA:

Awesome stuff, get ready for mayhem