Hey everyone! It's been a long day, but we had a blast! Despite a crash in the final and Discord suddenly dropping, the Lord of Darkness has risen! To not spoil anything I'll get back to that at the end of this thread.

So as it turned out, Professor Kugelschreiber was indeed the evil genius. He sabotaged the research on Dark16 by getting everyone addicted to LUA. When he finally claimed to have found the recipe for the Dark16 map it turned out to be a trap. The recipe was not a recipe for the Dark16 map, but a recipe to synthesize monsters that would help the Professor secure the facility and it's surroundings to himself. When attempts for contacts failed the government decided to send in a group of deputies to see what happened. When they too did not return they decided to send in two of the bravest commanders from the OpenRA community to find out what happened.

...check out the replays for the Finals to see how things went down!

CorrodeCasts Youtube Playlist with all games of Division A and Division B.

All replays of both division + finals: replaypack (and the Runner up Final between Eskimo and Orb on Dark16) Hit '0' to see the intro as intended for Dark16.

The mappack with 17 maps: DarkTournament2017mappack
If you want to Dark16 map without the intro, use this one.
Mappack with all DARK maps with light on (spawns and map visible on minimap, option normal).

The original Rulebook for the Dark Tournament.

Dark01: an adaptation of the map GreenStep. Some hostile forces present.
Dark02: a vanilla desertmap with a lot of gems which require long distance mining
Dark03: a vanilla temperatmap with several oil Derricks and Gap Generators
Dark04: both players start on a tiny Island and have to find greener pastures on shore
Dark05: a large temperatmap with 5 lakes seperating the players, lots of oil and a center with a lot of ore.
Dark06: a vanilla snowmap with lots of diagonal lines and a lake seperating the players
Dark07: large desertmap with two rivers
Dark08: GOD's divide with less resources and all faction-technologies for both players. Players start with two MCV's.
Dark09: An adaptation of Scantum. Forced faction: Russia, can't build dogs and players recieve 3 spies at the start.
Dark10: Behind the Veil, naval version
Dark11: Snowy map with 5 oil derricks. Only the starting ore field has an oremine, no further ore mines on the map.
Dark12: Two large snow peninsulas with broken bridges. France faction forced.
Dark13: Adaptation of Ideological Differences with some hostile units
Dark14: A temperat map with just clusters of forest and Ukrain airfield to be captured
Dark15: Large Snowy Island. Players start with two MCV's and a transport. Islands contain gemmines.
Dark16: Large temperat map with waves of monsters from two sides and a hostile base in the center.
DarkTIE: A three way naval map. Starting Islands have no ore spawns. All Islands have chronoshifts and starting Islands Iron Curtain. Ukrain faction is Forced, Demotrucks 50% off.

How to build your own Dark map?

A couple people asked me if they can also do something like this. Yes please go ahead and build these maps and organise such tournaments! Abcdefg30 helped me to remove the spawns. This is for 2 player maps, 3+ player Darkmaps is a bit more complicated, especially when only two people play on it. For now I will only describe how to do a two player map:

Step1: build a map, with two spawns, save it as unpacked
Step 2: open the .yaml and replace "mpspawn" with "mcv": ActorXX: mpspawn => ActorXX: mcv.
Step 3: add "LockPreview: True" in the yaml. I did it for all maps just before the "Players section" where the players (PlayerReference@Neutral:, etc) are defined. Now open the map preview in a editor, make it black or something else and save it.
Step 4: In the yaml copy paste this at the end:

Step 5: add a LUA file to your mapfolder with this code:

Careful with the LUA. LUA, not even once.

The two tables for both Divisions: 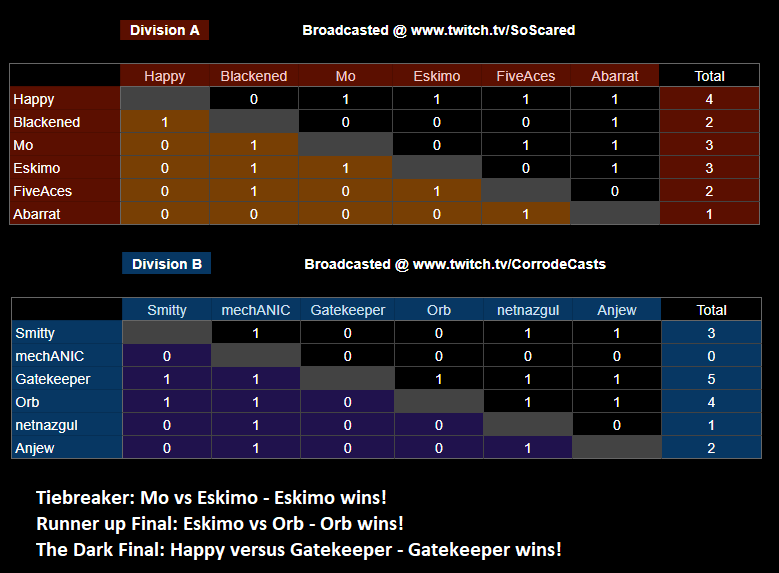 All winners please send me your PayPal details and I will transfer the money today or tomorrow. Gatekeeper $70, Happy $40 and Orb $30. The biggest upset in Division A: Blackened (vs Happy) ($10) and in Division B there have been no upsets(!).

Last but not least a big thanks to everyone!

It was a pleasure to do this tournament and see how people enjoyed it or suffered during the games. A special thanks to several people who made this possible: abcdefg30 for helping me with removing spawns and coding my wishes into the Dark16 map. Jazz for the technical support with the servers, Discord and keeping everything running smoothly. SoScared and Corrode for casting all day and they will produce more video content of the tournament. SoScared and Netnazgul have been helping behind the scenes, creating stuff for the organisation and images for the Twitchchannels. SoScared for donating $50 to the prizepool. The commenters: FiveAces, Netnazgul, ZXGanon, LittleAngel, Gatekeeper and I'm probably forgetting someone here. Also a big thanks to the players for being there on time and playing it all out to the end!
by FiveAces
It's been tons of fun, thanks for organizing this!
Being thrown into the could water was a hilarious experience. Also, this tournament has taught me not to play with a broken soundcard ever again

Apologies for disappearing so suddenly, some irl family matters came up at the worst time.
Congratulations to the winners!
by noobmapmaker
Several people request the Dark16 map without intro. He (or she) who can edit out the intro is welcome to do so and reupload to the Resource Center!
by abcdefg30

noobmapmaker wrote: ↑ Several people request the Dark16 map without intro. He (or she) who can edit out the intro is welcome to do so and reupload to the Resource Center!

I quickly made https://resource.openra.net/maps/24016/ . Hope that works for everyone.

by corrode
It was a really great tournament!!

I uploaded all 15 matches of division b to youtube:
https://www.youtube.com/playlist?list=P ... zRzu1owI6B[/url]

Right now I am rendering matches of division a, will upload them tonight or tomorrow!

Greez!
by noobmapmaker
Excellent work, both! I'll edit it in the op.
by SirCake
Nice :) That monumental stream kept me entertained for 4 days :D Cool finals, too! Thx NMM & team.
by eskimo
Just got round to reading all the bits.

Was truly a great day and really had loads of fun. I'd of even been happy on the bench just watching tbh too, saw some great games. Funnily enough though, me and Orb had no issues playing Dark16.

I'd definitely be up for playing some more of this style of tournament or even just casting. I think you've set the standard unachievably high NMM. But obviously the help from others also came into play i guess :p
Great job all!
by jaZz_KCS
I have archived the maps, replays, and both sleipnir thread pages (at least the first pages each) of the rulebook and post mortem threads unto the webserver

The folders for rulebook and post mortem should be browsable on the archive itself.
by noobmapmaker
Did a final update to the OP. Some new stuff:

Jazz has backup the tournament (replays and maps) to his fileserver.

Added Gatekeeper as a commenter.

And added all maps with "light on". By this I mean that the minimaps show, the spawns show and the options are no longer forced and set to normal.
by Murto the Ray
This post has been unstickied for inactivity
All times are UTC
Page 1 of 1