this is a thread to post my own playtest maps and try out simple rules ideas and discuss them.
Last edited by SirCake on Fri Jun 19, 2020 5:41 pm, edited 1 time in total.
Check out Dune2k-Advanced on my moddb page!
Top

Good initiative, will try to test it soon

Gave it a quick shot on Skirmish, definitely interesting !

A few suggestions :
- Why isn't the kennel available without PP ? Feels weird to be able to build barracks but no kennel
- How about reducing drastically Radar build time ? (i.e. 29s like SD), in order to allow a faster "air rush" build. (I've tried it, alongside a gren rush, but it still feels slow)
My (dormant) YouTube channel : FRenzy OpenRA
Join the map-making train here
Top

Comment on v002:
This is the "AA-Gun nerf test map". Also added some interesting features to the never-to-be-seen chinook air transport. Camo SAM and Mig/Longbow interaction is just an experiment. It aims to make SAM and AA gun more distinct units. The slower YAK allows for more micro and reacion time.
Should give players enough reason to cause them to try air play :D
Last edited by SirCake on Mon Oct 30, 2017 1:29 pm, edited 4 times in total.
Check out Dune2k-Advanced on my moddb page!
Top

@Frenzy, Thanks :)
yea had the same feeling with radar dome... will keep this in mind for IAI v002.

Dogs, yes thought I keep them as kind of high tech units! Also Zerg..., ummm, Dog rushes seem funy ;) Will change as well in v002 to no tech.
Check out Dune2k-Advanced on my moddb page!
Top

The next revision of the AVI map is out, I took your feedback and turned it into something..
*I changed vehicle transport size to uniform 5. (except ranger=4, supply truck=2, mammoth&MAD-tank=8)
*Also corrected my math error with the AA-Gun nerf. :) Reducing damage by 60% was way too much since it increased the 'alive-under-fire-time' of planes by +200% (or three times as long) . Now its damage is reduced by only 25% which translates to +33% increased 'alive-under-fire-time'.
* other yak changes are experimental (but very justified if compared to the hind)
Check out Dune2k-Advanced on my moddb page!
Top

An attempt to finally fix the Naval issues. It is actually super easy to fix all problems. Worked that out with SoScared.
Top

Keep in mind that when doing balance tests its fun to do but if you aim to make them official or want them to be adding units won't go well.
Top

Really great what you've done in these new modmaps.
I just had to install it when i was reading about swimming Tanya.
You made a really good job this is a funny and very good looking feature, diving when someone shoots at her hehe gj
Top 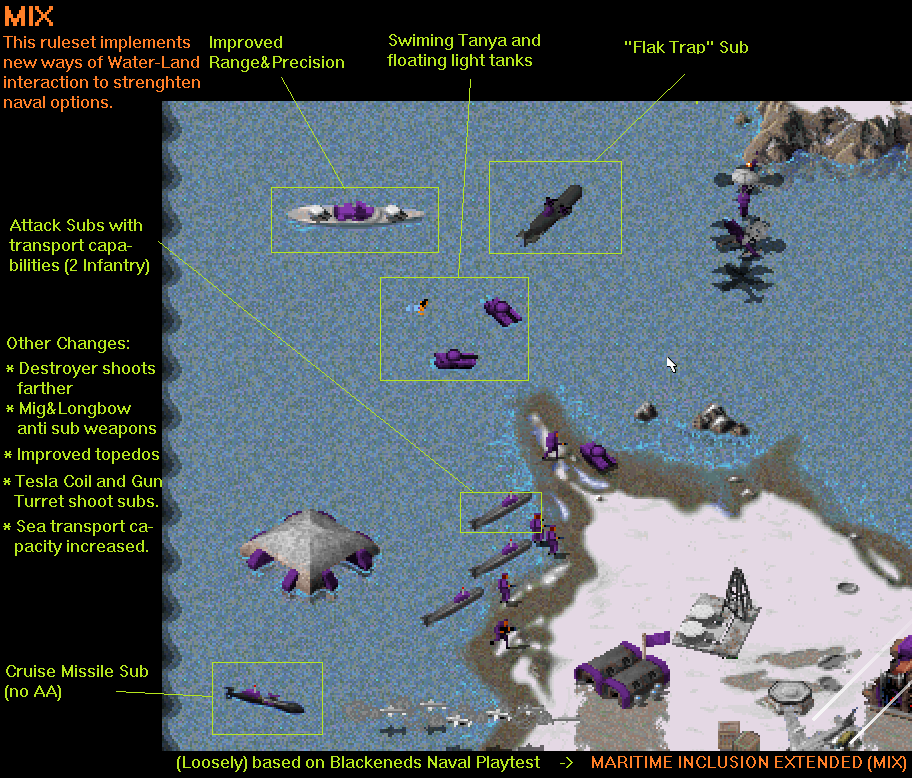 MIXv003 is out. It fixes the attack move bug with the attack sub (which will be fixed in the next official release), reverts all subs back to light armor (heavy felt too strong vs Hinds combined with the Flak Trap) and makes torpedos not jammable. Also Flak Trap is now radar tech and missile sub back to tech center tech like it should be.
Check out Dune2k-Advanced on my moddb page!
Top

I have already posted about these on discord, but i think it might be good idea to post here too:

I really love the swimming Tanya. Little homage to RA2