Page 10 of 10
by Harisson
Really nice ideas, thank you very much.
I never read any Dune books, I only know Dune from Dune 1 (adventure) and Dune 2 (rts), so it's surprise for me, thaht on Dune is Lava.

-You mean Dune 2 buildings ? As I said above, i never read any Dune books. But it's possible to create half sanded buildings, maybe destroyable.

-Dune2k has already cave as building, you can find it in Map Editor. (it's destroyable and not passable).

-have you any concept or images ?

-im not sure if i can make something like this....

I have also some ideas, how about these ?
-destroyable sand cliffs like in TS, so you can make a new way.
-big sand waves
-deep pits, or as 'kniverson' said something like gaping chasm
-small clifss (1 tile height)
by knivesron
hey.

I have never read the dune books myself and i never played more then 10mins of the first dune adventure. i have clocked dune 2 multiple times and still love it to this day. i have watched the old movie and both of the newish mini series. (mostly politics... boring enough in rl, extra boring when its a completly fictional political system.)

the reason i thought of lava was due to my understanding of planet science. (which isent very much). i Would imagin arrakis would not have tectonic plates as there are no obvious continents. The planet arrakis is a hot planet tho. so the heat must be coming from somewhere which will melt rocks/minerals to make lava/magma. theres 3 ways i think heat could be pumped into the planet. 1, the star the planit orbits. 2, the gravity from the star or another nearby object causing the planet to be squezed and strectched. (like one of the moons of our gas giants. io or europa i think) 3, the civilisations controlling the planet are using technology to keep the temp optimal for spice production.
The third example seems unlikly as the worms would have evolved over a long period of time (considering their life span) so with this in mind a stable ecosystem has to exist.

Thats pretty much my reasoning for lava on dune. lava visual from the surface would be a rare event but perhaps you could have lava leaking out of a rocky mountain and solidifieing on its way out. (like the hawaii volcano.)

Sorry i have no concepts or nothing these were just ideas i thought would be cool to see in dune
by Harisson
I never saw dune film or books, so I based only on first two games

new screenshot:
by -Jes-
I can only suggest you go rent/buy it at once then.

And if that's not an option, then there's this halfa##ed way to watch it:
Theatrical cut shamelessly dumped on youtube.
by Harisson
thank you for recommendation, -Jes-
I have to see atleast one dune film.

Here's my CONCEPT of platform, it's uses bridges parts from 1.06 patch. What do you think about it ?
by WolveNZ
Looks cool!

btw... Whats a Platform? O.o
by Petrenko
Fits well into the atmosphere. But its toplayer or how to call it is a bit dark. What about just concrete or anything? With some white stripes for lanes etc?

Edit: With Stripes
by Harisson
this ? I used starport concrete....
by Petrenko
Heyho,

A shame we can't just use .png or .dds and have to stay close to these fucking palettes.

But i'll guess this will come sooner or later :3
by Harisson
I finished:
sand-cliff-rock(look at valley),
rock-cliff-rock (palace, radar)
and sand-platform. (south)

EDIT: I'm looking for a tester

by WolveNZ
I Liked Petrenko's Platform look, looked more worn like its been sitting in the Sun/Sand for awhile... Rarther than the Concreate look :p

But thats just me
by zypres1

Harisson wrote: ↑I never saw dune film or books, so I based only on first two games

How would this concrete tiles look directly on sand?

Can I get those in the temperat terrain palette, please?
by psydev
The extra tilesets look very exciting for D2K. Will they be added to the map editor? 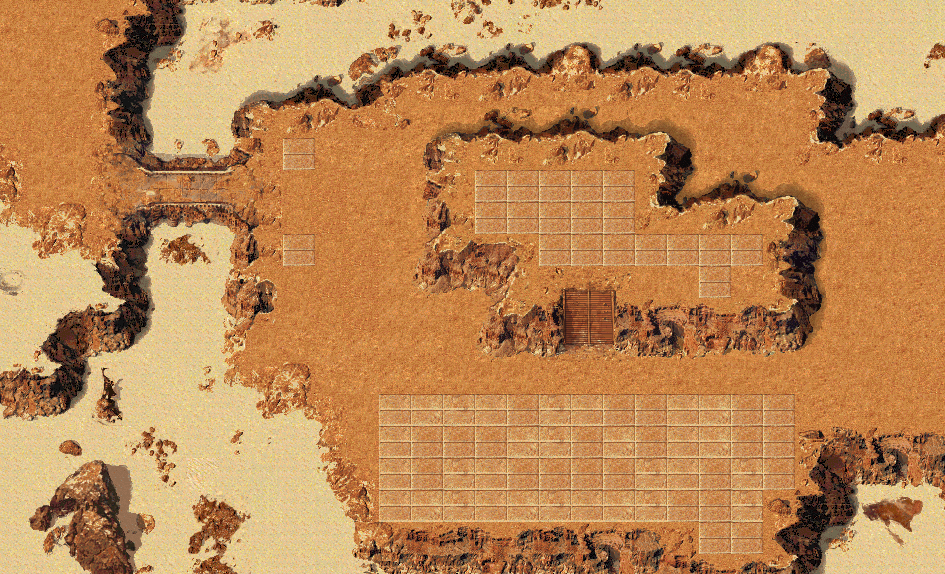 This looks awesome. Throw your new tiles towards https://github.com/OpenRA/OpenRA/pulls to get them included in the official mod.
All times are UTC
Page 10 of 10