if time and money where unlimited

Discussion about the game and its default mods.
Post Reply
12 posts • Page 1 of 1

Recently Ive been talking about how a more developed website would be fitting to the current OpenRA state. I think an improved website would bring people together in one place, increase participation in every aspect of OpenRA (more contributions, more streamviewers, more people coding, etc).

Important note: by posting this I do not want to push any developer into making this. Its just a mockup if time, money and lines of code where unlimited. Again, its not a sneaky way of pushing this in OpenRA's throat, just to share a vision on what I think OpenRA could be like as well.

Second note: Yes, the design is ugly. Also the menu and all features dont have to be like this, its just a quick set up to explain what I mean.

On the left a menu with several main buttons. Most are selfexplanatory. Top right we see a couple buttons that lead us to the important satellites of OpenRA: IRC to talk to devs, Github to report issues and Discord to find yourself an opponent or chat. Some other buttons could be added, may have missed an important one.

Also on the frontpage there are several buttons with all kinds of news or other noteworthy happenings. 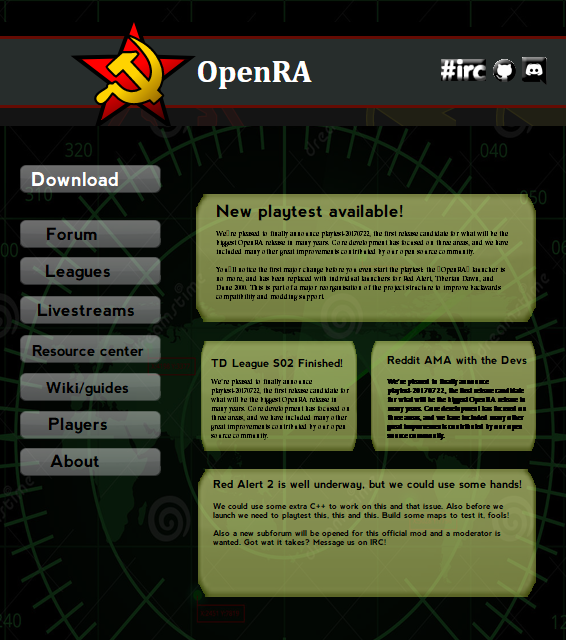 This is an example with a bunch of subfora that you can click on. These subfora are an example, I didnt take a lot of time to overthink which subfora would be usefull. 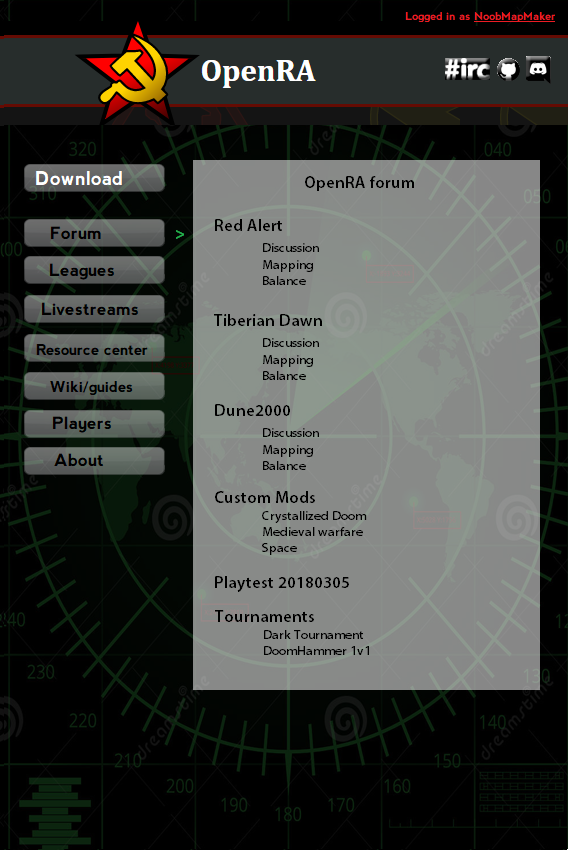 The forum - Ive clicked on the Playtest subforum 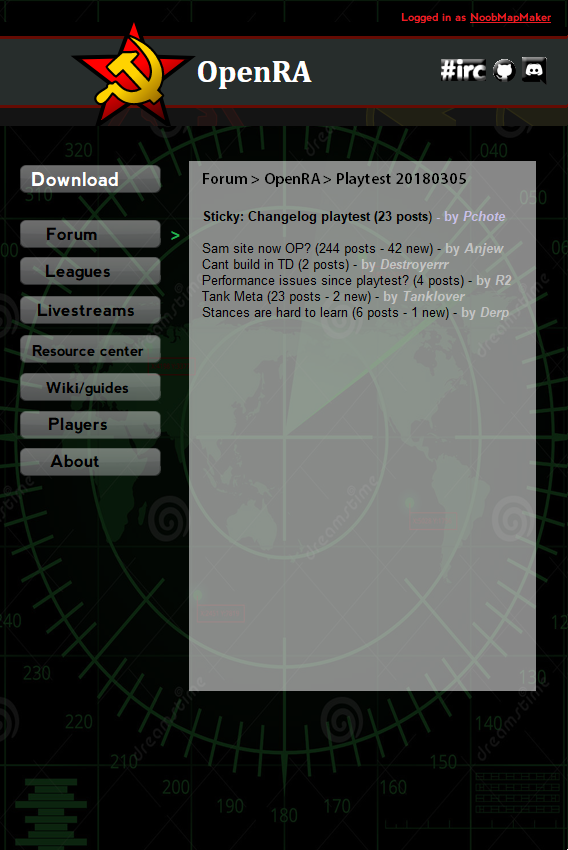 Navigate through the menu to see the table for the specific division you want to see, which is updated by the League-admins. 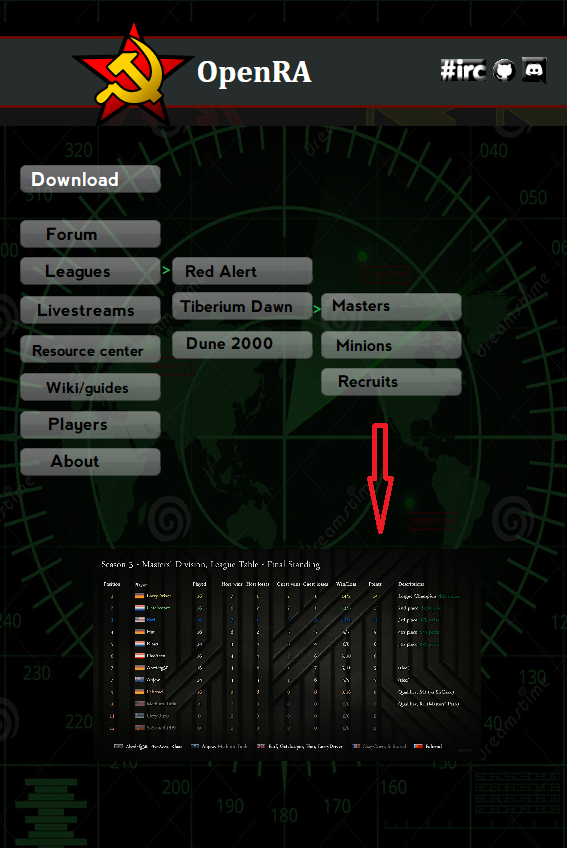 For basicly anything that has to do with OpenRA 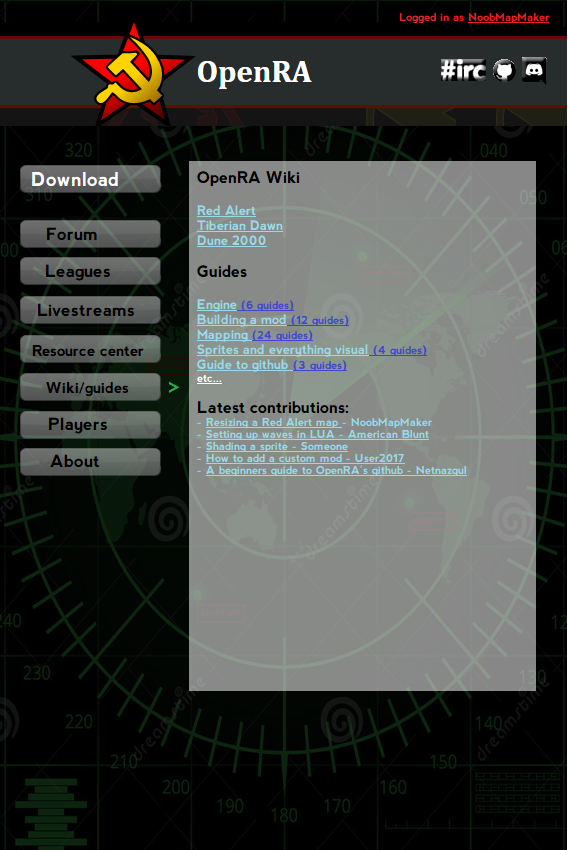 A list with all players, their ratings, badges theyve earned etc.
Also note the Livestream button has a green light, indicating someone is streaming OpenRA at that very moment.
Under the livestream button youll find a list of streams and youtubechannels that broadcast OpenRA content. 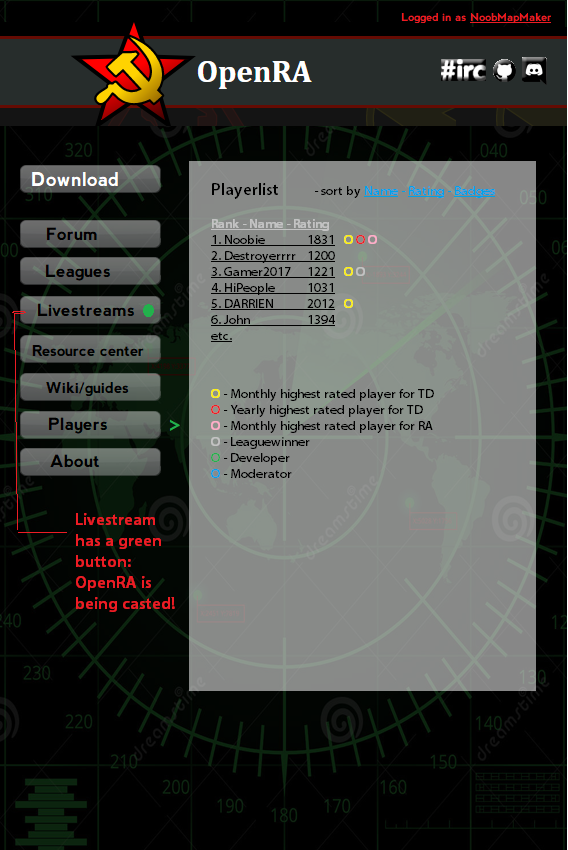 Again, no intent to push my ideas through, just how I envision a website that would support OpenRA in its next step - if there would be no technical, financial and chronological limitations.
Playlist with ALL games of the Dark Tournament Youtube.com/CorrodeCasts
Consider supporting OpenRA by setting a bounty or by donating for a server
Top

Without radically modifying the current design, we can add new buttons into the menu :

Yes, on this mockup, there are much more buttons than before but there have been several people (me included) who complained about half-hidden links (forum, IRC channels, resource site, replays...).

Yes, I think that would be a huge improvement! Also realized I didn't have a ModDB link.
Playlist with ALL games of the Dark Tournament Youtube.com/CorrodeCasts
Consider supporting OpenRA by setting a bounty or by donating for a server
Top

Something you've wanted to do, only better

Definitely! My main point was to explain how a more integrated website - with several of the interesting ways to enjoy OpenRA more prominently featured, and some "wish it was possible" features - would help to gather the community in one place and to increase participation.

His execution is certainly better and nicer for the eye!
Playlist with ALL games of the Dark Tournament Youtube.com/CorrodeCasts
Consider supporting OpenRA by setting a bounty or by donating for a server
Top

Your efforts honor you, but what is this supposed to be?

If it is not criticism at the current web-layout and no hint to the devs where the page should go, nor a statement from you that you will be developing the website for OpenRA, what is it?

I much more like your hands-on effort to organize "The Dark Tournament" and the LiveStreams-Thread than these intellectual games on the forum.

Maybe you can post something on Github that you would be willing to maintain a Live Streams/Live Media/Social Media category on the OpenRA homepage like you do already on these forums. Im sure that would be appreciated and backed quite quickly. It's only ~10% of what you suggested here, but it would have a chance to become real.

Btw. many Indie developers who sell their games for money have worse websites than OpenRA.
Check out Dune2k-Advanced on my moddb page!
Top

Had a couple chats about OpenRA and things that was going on and I noticed that it was a lot of effort to explain what I had in mind, using just text. So I made this to explain and hopefully to spark interest and others to think with me.

Yes, the github route would be more hands-on. But I genuinely don't want to push devs into doing anything. Also I have allmost zero knowledge of website building. So I don't know what I ask (in terms of time and effort) and I don't even know if it's the best solution!

To sum up: this was a first step into sparking interest for an integrated site like this in the way I envisioned it. Also I hope in the future something like this will be created as it has many advantages - I think. Lastly Id like to express that I hope others will step in to help building whatever is the plan.

Edit: yes I'd be willing to maintain a page on the OpenRA site, but I don't many will view the list. Here more people see it. Also it would be best to let streamers enter times and dates and/or click some kind of button to show they're live, as I'm not able to check everywhere when people go live.
Last edited by noobmapmaker on Fri Aug 25, 2017 10:23 am, edited 1 time in total.
Playlist with ALL games of the Dark Tournament Youtube.com/CorrodeCasts
Consider supporting OpenRA by setting a bounty or by donating for a server
Top

As for the forum: at this time Pchote has no time to migrate everything and for privacy/security reasons he wants to do it himself - which is logical.

No need to rush though, Vellu offering help is greatly appreciated already!
Playlist with ALL games of the Dark Tournament Youtube.com/CorrodeCasts
Consider supporting OpenRA by setting a bounty or by donating for a server
Top

netnazgul wrote: ↑ I don't think that there will be problems with how to proceed on site remake if/when there is a person to do it

Exactly. Most Features get canceled because there is no manpower to make and maintain. Some of the things which you are asking are not difficult: So, to recap: Livestreams(/Live Media/Videos) and Leagues(/Competitive/Tournaments) categories can be done tomorrow if anyone is willing to maintain it. The others are much more difficult.
Check out Dune2k-Advanced on my moddb page!
Top

Well, when the time is there I'd be willing to put in some time!
Playlist with ALL games of the Dark Tournament Youtube.com/CorrodeCasts
Consider supporting OpenRA by setting a bounty or by donating for a server
Top

xanax wrote: ↑Without radically modifying the current design, we can add new buttons into the menu

That is way too crowded. All proposals seem to suffer from that.
Top
Post Reply
12 posts • Page 1 of 1