Discussion about the game and its default mods.
Post Reply
14 posts • Page 1 of 1

WHO IS THE DOMINATION DIVA.


THIS TUESDAY blasts off with a deadly competition.

DOMINATION: First to reach the total number by flag capture wins the game, your enemy is incinerated instantly.

To enhance the stakes the first player to get the most DIVA POINTS over the course of a LIMITED TIME of just a few hours. WINS and is crowned the DOMINATION DIVA!


3 DIVA POINTS for winning the game through domination or having the highest score by flag and then destroying the enemy.

2 DIVA POINTS for destroying the enemy outright but having less score by flag.

1 DIVA POINT for losing the match but being somewhat of a diva and getting more points than the enemy before dying. ( You cant just get ahead a bit and suicide)

0 DIVA POINTS for just surrendering after getting ahead a little.


Will be first come first serve: THE QUEUE SYSTEM IS REFINED AND READY TO GO, when you lose your match you go to the bottom of the queue, however your score adds up every time you fight.


FIND OUT IF YOU ARE THE FLAG MASTER at 5PM to 9pm UTC.

SPECIAL THANKS TO: Unano for the Domination code and general wizardry and of course the incandescent WhoCares for the relentless creativity.
Last edited by N/a on Sun Oct 28, 2018 12:28 pm, edited 4 times in total.
Top

The first ever Domination event!

After many battles we have TWO DOMINATION DIVAS:


This was a fun tournament, lots of amazing matches, lots of great players, I would like to give special thanks to FiveAces for streaming who was feeling under the weather but persisted nevertheless!

I would also like to thank Unano and Whocares again for their help.

And of course Orb for his Allies Overhaul edits!


The majority of the tournament is here https://www.youtube.com/watch?v=1RPZn0cVTxw (Let us know what some of your favourite moments are)
and I'm sure the few final matches will be about in the near future!

And look out for more in the future!


Are you the next deadly diva?
Top

N/a wrote: ↑The 2nd ever DOMINATION DEATHMATCH THIS TUESDAY at 5pm UTC to 9pm UTC

"Do not trust the balance tzars (Smitty, Orb). They are making the changes either for the wrong reasons, for no reason at all, or just because they can and it makes them feel good." - Alex Jones
Top

Thanks to Fiveaces for streaming 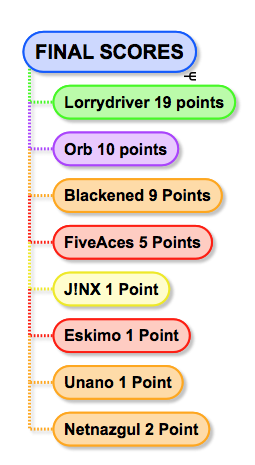 Domination is back this Tuesday! 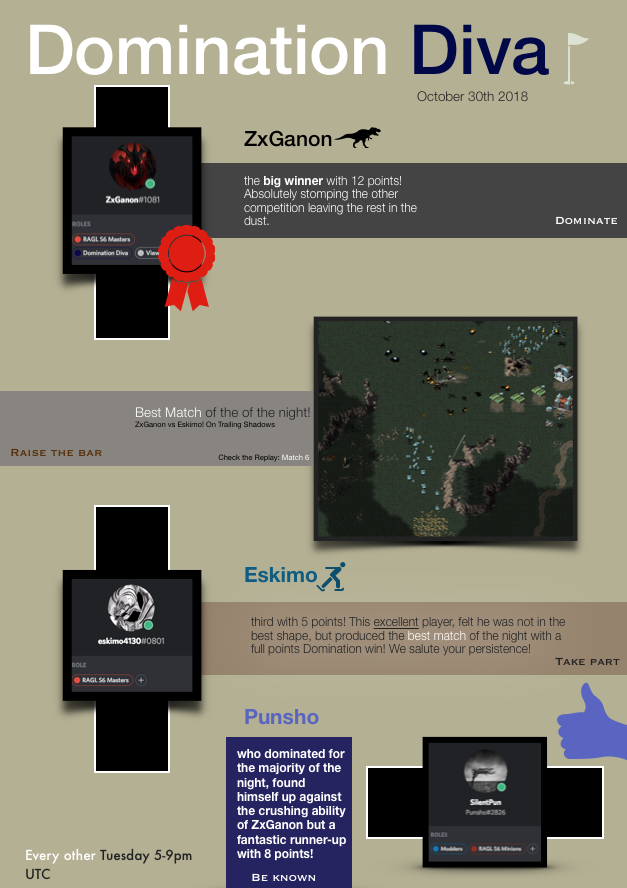 
A fantastic evening all who watched will surely know, the domination is still a young mode for OpenRA but provide a new an interesting dynamic that you can feel instinctively excited about.

That being said it is worth recognising that it does need calibrating and refining so any feedback of the event is welcome.


I think also its worth pointing out that faster game speeds are better for tight time limited tournaments, the faster the game speed the more games you get.

The more games you get, the chance of highly quality matches rises.

Last nights match 6 was really exciting, there were 10 matches in total last night, spanning 3 hours. That was on fast mode, in contrast to the speed freak night where you play on fastest, you get 16- 18 games in 2 hours... A world of different. Maybe we don't need to play on fastest for this but experimenting with faster could be quite fun.


Thanks again to all participants and all the casters, FiveAces, SoScared, ZxGanon It makes the world of difference.

I think also its worth pointing out that faster game speeds are better for tight time limited tournaments, the faster the game speed the more games you get.

The more games you get, the chance of highly quality matches rises.

That also changes the game rules somewhat, in that people are accustomed to play on normal speed and timings are completely different on other speeds, which throws everyone's play off.

My suggestion would be to increase value of flags so that it effectively speeds up the game by having shorter timespan until domination win. Currently you can force your game to just ignore flags and demolish the opponent the usual way, especially when there is a skill difference.
Top

Back this Tuesday with... 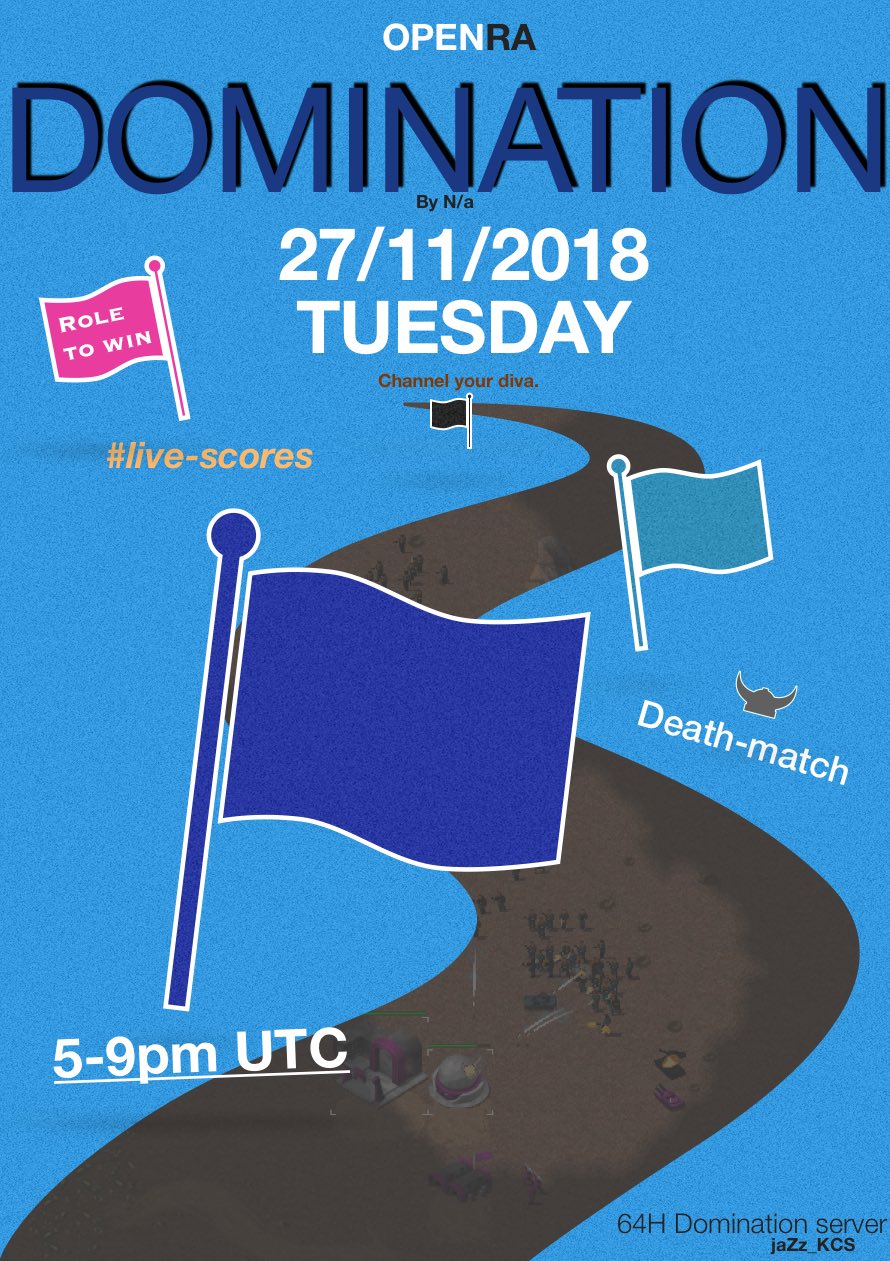 Less pts per flag scored per second?
Did i read it correctly? As people wanted to address the lack of incentive to win by points.
Top

Not points per flag per second. The request was to drop the amount of points, per flag...meaning the current thought process is that you have 500 points for each flag you have. Feedback has been this doesn't create enough focus on the domination side, and you can just ignore it and stomp. So the request was for 400 points per flag, so instead of 2500 typically for a 5 flag map you have 2000.
Top

eskimo wrote: ↑
Sun Nov 25, 2018 8:09 am
Less pts per flag scored per second?
Did i read it correctly? As people wanted to address the lack of incentive to win by points.


Less total victory points per flag needed to close out the game, as far as I understand, so VP pressure matters more.
Top

"Less points required to win the game" would suffice

To other things, why's this one padded with "DEATHMATCH", Speed Freak with "king of the hill" and so on? This one is not a deathmatch, because deathmatch means a simple destruction mode, whereas you can get points here without actually destroying your opponent. And King of the hill usually implies there is a mechanic topple a "king" easily, while in Speed Freak (and in WW) has the player with most wins as a winner, just with a tweaked mechanic of matchmaking.

TL;DR I'm not a fan of adding flashy terms around without actually adhering to their meaning.
Top

Domination is death-match oriented, the player with the most points wins.

"Normally, the goal of a death-match game is to kill (or "frag", from the military term) as many other players as possible until a certain condition or limit is reached, commonly being a frag limit or a time limit. Once one of the conditions is met, the match is over, and the winner is the player that accumulated the greatest number of frags."

Just substitute frags with diva points and you have the same effect, the goal is to kill as many enemies as possible through domination which is the same as destruction of the enemy in the most common sense of conquest.

Indeed that is true, in isolation that would not be a death match, however... Domination, death-match as a competition, means that the points are part of the whole through out the night and the person who accumulates the greatest number of diva points is the winner.

Speed freak is a fastest competition, which works on a king of the hill system, someone remains on attempting to rack up as many match wins as they can in a row, and when they are knocked off there score is the amount they got up to, if they want to do better they have to start from scratch again.
When they are knocked off, they go to the back of a queue.


"i'm not a fan of adding flashy terms around without adhering to their meaning."


Gosh, that sounds quite rudimentary